Ambrose Weeres and His Idea that Started an Industry 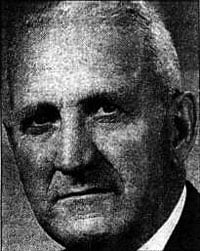 When Were Pontoon Boats Invented?

In 1952, a farmer in Richmond, Minnesota, had an interesting idea that led to the pontoon boat industry that we know and love today. Ambrose Weeres, born in 1907, had the idea of placing a wooden deck on top of two steel barrel columns to make a stable floating device.

Despite spending his formative years as the owner of the Richmond Mill and Elevator and only having a fourth-grade education, he was a sharp, creative and inventive man who had a passion for improving things.

The idea first came about when a friend of his asked him to come up with a new boat idea for the local lakes.

His plan was to use empty oil barrels, having seen how buoyant they were previously. He took those barrels, created the steel tubular columns, welded them together from end to end, and secured a solid wooden deck on top to make a boat that would be far sturdier than a conventional boat would be on a lake.

He was quoted as saying:

“I worked on it and designed the tubes, then a raft, and kept going until I had a boat. The hardest part was making a mount for an outboard motor and designing a steering device.”

The first ever pontoon boat was called The Empress.

Once his contraption was finished and tested, he had the belief that he was onto something that could be marketed to the local community. Being in the land of 10,000 lakes he knew that he had a huge potential number of buyers, as long as he could get the idea in front of people.

With the support of local marine dealers, he named his first pontoon boat “The Empress” and had no real idea on how popular they would become in such a short space of time. Inside just a few year, the demand was so high that he could no longer keep up with production so formed the Weeres Industries company.

By 1955, his formative pontoon boats were selling in large numbers and had been received so well that the Winona Daily News named the Weeres Pontoon Boat “Boat of the Year.” Ambrose Weeres was from that point on labelled “Mr Pontoon” and was elected to the Minnesota Marina Hall of Fame for his accomplishments. 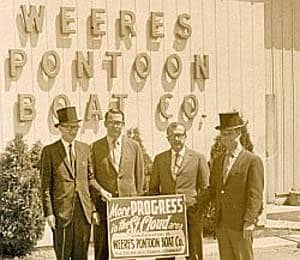 Furthermore, in 1990, Ambrose Weeres was officially recognized as the inventor of the pontoon boat in a resolution issued by the Minnesota State Legislature. He is also credited with inventing the first paddle boat in 1956.

In 2011, Weeres Industries was sold to Premier Marine of Wyoming, Minnesota, but the name continues to live on, with the Weeres Pontoons still being a trusted name and brand in the industry.

Ambrose Weeres passed away in 1991, but his idea of the pontoon boat is something that is now enjoyed by millions of people every single year.