Do Yachts Have Lifeboats? Yes & No – Here’s Why

Whether you on yachting vacation or having a weekend of fun on your own yacht, safety should always be of paramount importance. One question that a reader of Pontoonopedia recently put to me was whether there are lifeboats on yachts. I wanted to answer that here, and give some background into

That’s the short answer, but it can get a little more complicated. Read on for more details on yachts having lifeboats and the different types.

Why boats and yachts need lifeboats

The maritime regulations set out by the United Nation’s IMO together with the International Convention for Safety of Life at Sea (SOLAS) require that all cruise ship, yachts, boats have lifeboats or a life raft. The lifeboats must be big enough to accommodate the maximum number of individuals the boat or yacht can accommodate. 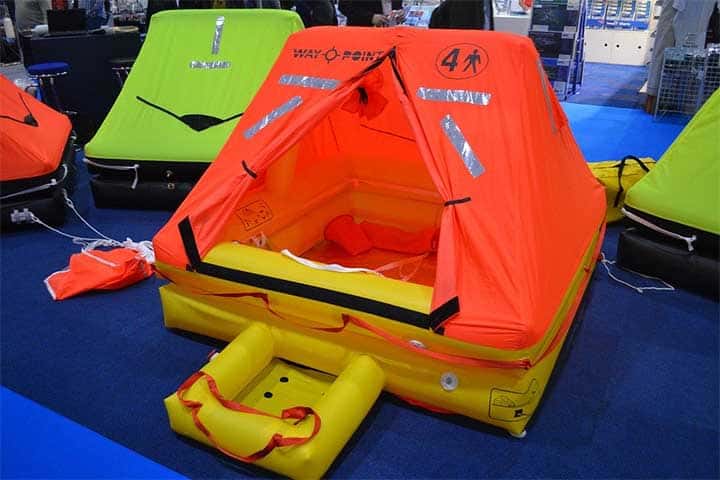 This is an example of the type of inflatable life raft you might find on a smaller yacht.

You will also be taught how to wear your life jacket and the escape routes to the lifeboat locations.

In the US the laws also require that lifeboats are placed in both sides of the yacht or ship to make sure all passengers are fully accommodated. Many superyachts have lifeboats that can take over 100% capacity to accommodate all people on board the yacht.

Life rafts vs lifeboats on yachts

They are different in form but perform the same functions. That is to provide escape from the yacht in case of an emergency. Life rafts are inflatable and have the advantage of using up less space compared to a lifeboat – this means smaller yachts can have life rafts instead of lifeboats.

The types of lifeboat used on yachts

Generally, there are several types of lifeboats which are used on yachts; depending on the size of the yacht and distance of travel. They range from free fall lifeboats, closed lifeboats or open lifeboats. Additionally, modern lifeboats now include hyperbaric lifeboats and fireproof lifeboats.

This lifeboat simply slides off the yacht quickly, but at a safe speed. The freefall is very steady and can cope with tall waves, strong storms and strong winds. They are closed to offer cover to passengers, and you can safely evacuate through an enclosed cabin.

These ones are closed over the top to prevent people being exposed to the elements. They can be totally enclosed or moderately enclosed. 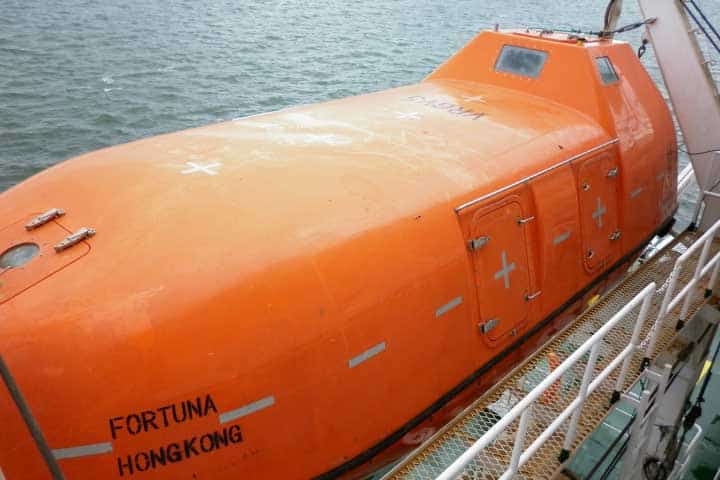 This is an example of a closed lifeboat that might be found on a commercial ship. (Image purchased and licensed from StoryBlocks.com)

Unlike closed lifeboats and freefall lifeboats, open lifeboats, as the name suggests, do not have a roof. They are more commonly found on smaller boats.

Open lifeboats are mostly manually operated or use an ignition engine. By law they have limited in recent decades, as they can be unsafe in storms and strong waves.

Hyperbaric lifeboats are mostly used in major evacuations which require directly evacuating people from the yacht rather than being on the boat.

These specialist lifeboats have a life support system installed plus an onboard generator and crew equipment. To be used on a yacht the hyperbaric lifeboat must comply with the SOLAS requirements.

They are used in cases of oil spillages and fire emergencies. They are built to withstand fire, being heavily insulated for this purpose.

They are occasionally used in large yachts where there is risk that involves oil spillage or fire.

These types of lifeboats are significant depending on the size, location and distance the yacht intents to operate on.

Whilst looking into the topic of yachts having lifeboats, I stumbled across some other subjects which I thought were very interesting, and might be relevant to you too.

How many lifeboats are required on a cruise ship?

But what about on cruise ships? 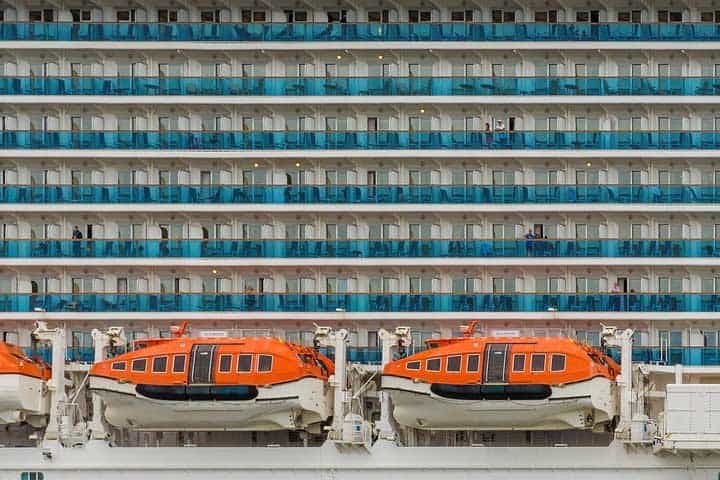 This is the classic lifeboat you can expect to see on the major cruise ships.

How is the capacity of a lifeboat calculated?

You might rightly be worried about whether there’s going to be enough room in the lifeboat. Don’t be, here’s how the passenger capacity is calculated on how big the boat is.

For example, the size, number of lifeboats and their passenger capacity for a vessel is calculated by the boat’s type and how many crew and passengers are on-board.

It’s very unlikely that you will see a yacht with a large and visible lifeboat, unless it’s a mega or superyacht. Instead, most yachts will have inflatable life rafts to deploy in the case of emergency.