Back in 2012 a floating BBQ grill hit the market, with various blogs and websites talking about this innovative, and possibly dangerous product.

Despite my best efforts, it appears that the floating grill (also known as the Floating Flamer) is no longer available to buy online, but here’s what it did look like at the time. 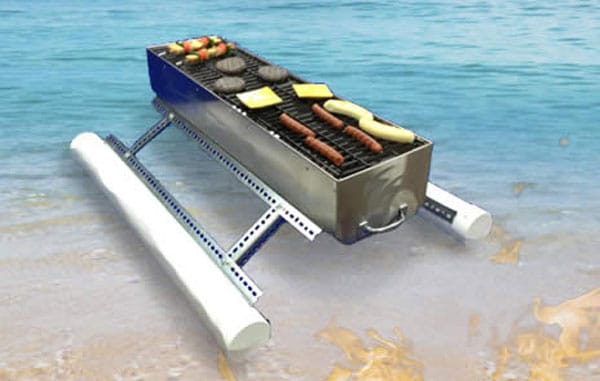 The Floating Flamer – which is no longer available to buy online for very good reasons I am sure.

And here’s what the company behind it were saying on their now defunct website:

“What’s better than your toes in the sand, swimsuits, sun, and a cold drink in your hand? Well, a floating grill of course! Now you don’t have to leave any of that behind to fill your sexy bronzed bellies! The world already had the first four things but lacked the last one. Until one glorious night sitting outside after a few drinks and some great ideas the charcoal smoke cleared and idea of the Floating Flamer was born.”

Perhaps the reason it’s no longer available to buy is due to it being not the safest of products. Who knows?

But you still might have an over-whelming desire to cook BBQ on a floating grill.

Personally, I have no need to cook up a cheeseburger on the water, but there are people who do, and they have actually made their own floating BBQ grills over the last year or so.

And in fact, I saw just one such product on Facebook recently in a pontoon boat owners’ group, so thought I would share it all with my own readers here on Pontoonopedia.

How to Make a Floating Grill

Before I get into this, let me give you a disclaimer:

I don’t advise that you do this, and this post is purely for informational and entertainment purposes.

All I am doing here is replicating some of the comments and photos that I saw on Facebook posted by a guy who made his own floating BBQ grill to use off of his own pontoon boat.

Whether you choose to replicate this method is entirely up to you, but here’s how he got on and the results that he got, with feedback and comments also included from other pontoon boat owners.

Here’s what he started off by saying:

“I made a floating grill today. I hope it works! Planning on trying it out this weekend, I added Yeti sized cup holders as well, wish me luck!”

And here’s what his first design looked like. What do you reckon? Will it float? 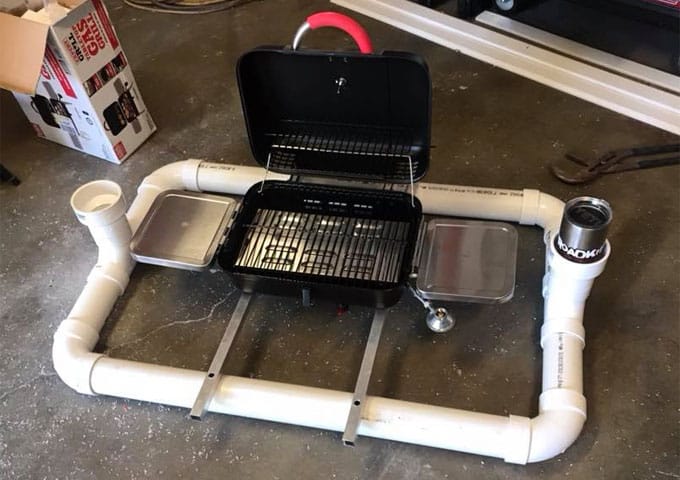 This is what the DIY floating grill ended up looking like at first concept design.

Once he posted the photo above, here are a selection of some of the comments that he received back on his DIY floating grill design.

“What you now need to do is fill the PVC piping with expanding foam, then it’ll definitely float.”

And that’s exactly what he did next!

He used 3 cans of insulating foam to fill the pipes.

Other Facebook users also recommended that to make the grill float he should wrap some swimming pool noodles around the PVC frame to help keep it buoyant.

He didn’t take that advice on board but did then respond when other users commented that the grill was bound to not work if there was a wake in the water.

“Your hot dogs are going to roll off when wake comes so you probably need to add some railings to the grill if you really want this thing to work properly on the water.”

The guy who made the floating grill responded that his grill set-up had a lip to stop this happening, and he had so far only tested cooking flat steaks.

So back to the drawing board he went!

He was then asked whether it would have a lightweight anchor fitted to it in order to keep it from floating away!

It appears that he didn’t!

“I attached all the grilling utensils with rubber coated galvanized wire so if they fall of they won’t sink.”

As you can tell, this guy is ingenious and has almost thought of everything.

Some bright spark commented that it would probably work without filling the pipes with foam, as kind of like boats, foam doesn’t actually do anything until it fills with water.

Our DIY enthusiast responded as follows:

“I used 4-inch PVC piping, and I did put foam inside. It works. But I only filled it with foam because of the cup holders. They’re open and could let water inside the pipes.”

But Did the Grill Float?

Take a look at the video below to see for yourself!

Upon the successful launch of his DIY floating grill this is what our hero had to say:

“I did it! I’m freaking excited! This weekend is going to be fantastic, no more cold sandwiches for me!”

“This is great, until a wake boat idles by and puts hamburgers on the sun. I hate wake boats!”

“I still don’t understand the desire to grill on a boat and water. Why did you bother making a floating grill, it makes no sense?”

Someone then responded back in support of our DIY hero with this comment, which I rather like!

“Why the hell take time out to say something negative about this awesome invention? I’ll never understand that thinking. I grill on my boat every time I go out (that’s part of the fun for us) – now I have an awesome alternative. Thank you.”

And then someone else said:

“I really hope it works out, but I could see a few problems. I like the idea though. Why not just make a mount off the side of the boat?

To which our floating grill inventor responded:

“It works, I posted the video a few minutes ago. I don’t want a mount on the boat, too much potential for dripping grease or starting a fire. I also just wanted to do something different.”

“I made the mounts of 1-inch square aluminum, so it will dissipate heat quickly. There are also insulated spacers between the grill and the tubing. I’m not too worried about heat transfer.”

“I’m going to see how it does this weekend. I may add a couple more tubes of PVC, maybe 6” instead of 4” to help raise it up in the water a bit more. I’ll decide after I see how it performs”

Personally, I think this guy is an absolute legend and whilst I wouldn’t do this myself, you can’t help but appreciate his inventiveness and perseverance.

Want to Find Out More?

You can read the posts in full and offer your own feedback on this idea by visiting the following links on Facebook.