How Do They Count Crab on Deadliest Catch and Not Go Over Quota?

To count crabs on the Deadliest Catch, the crabs are put onto a sorting table, with only the keepers being kept. The females and smaller ones are put back. The keepers are then counted and placed into holding tanks, with an average weight of each crab used to calculate quotas.

That’s the short answer to the how they count crabs on the Deadliest Catch, but let’s get into the detail a little more based on what I’ve seen in the TV show and read in interviews.

How do they know how much crab is in the boat?

Whilst it might look like a really quick catching and counting process in the TV show, the reality is actually quite different. Here’s how it works, step by step, as far as I can ascertain.

#1: Crabs are caught and brought on board

The first thing you’re going to think is how on earth do they know how many crabs there are when you see all those claws and legs flying all over the place?

How it can it be possible to count them all accurately, and then have these numbers match up to their quota?

Here’s what they do next.

#2: Female and smaller crabs are culled / put back

Anything that looks too small is thrown back. They also don’t keep the female crabs so when a full pot comes over the rail, a few deckhands gather round and start pulling out any crabs not wanted, to get thrown back in. 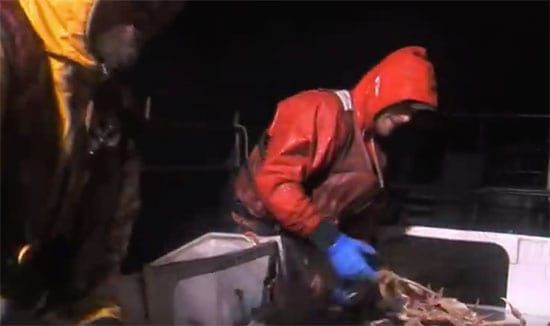 This is an action shot of them pulling the crab in and trying to sort through them.

It can be quite easy to identify a female crab as they have a flab underneath which is wider than the males.

But that won’t effectively cull all the ones they don’t want, there’s still more work to do.

#3: Crab pots are then placed on a sorting table

Next the crab pots are taken to a sorting table, where the culling will continue in case any females or smaller ones made it through to this stage.

You might see some of the guys using a hand-held stick. This is a measuring tool which lets them quickly figure out if a crab is of a legal size or not, but most of the time, this can be done on sight and experience alone.

The keepers are then put down into the holding tank and counted as they go. 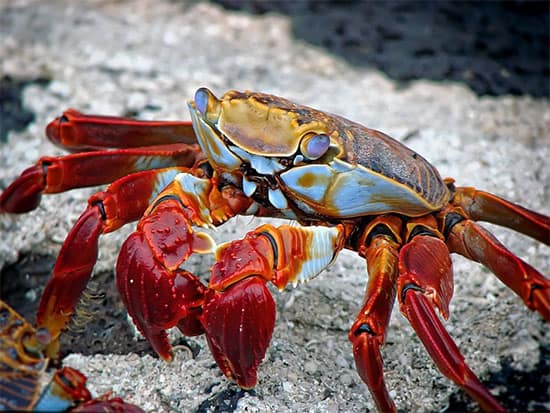 The Brenna A fine for a small crab was one of the most interesting stories in recent times.

This process takes time, and whilst on TV looks like it might only take 45 seconds, in reality it might take up to 10 hours to run through a 50-pot string. That average out at around 12 minutes to process each pot – it’s hard work.

#4: Crab counts are reported to the deck boss then the captain

With all the good keeper crabs counted, it’s time to start reporting the numbers.

Every guy on a sorting table is responsible for counting his own crabs. Once complete he reports that count back to the deck boss, who will then give the final numbers to the boat captain.

#5: Calculating how many pounds of crab they have

You might now be wondering how they keep track of how much weight in crab they have, and how they make sure they don’t exceed their quota.

It’s quite simple; they use an average weight figure per crab, so they should have a reasonable estimate on how much weight they are carrying in the holding tanks depending on how many crabs have been counted.

The crabs are not weighed individually, so this is the only way to calculate what their total catch weight will be.

The crew also have a hook that they can drop down into the hatch of the holding tank. This hook lets them measure the line that drop in, and if it hardly goes anywhere, they know that the holding tank is almost full.

The captains are also very experienced and can look into a holding tank and have a reasonable idea on what’s on board.

Since the catch quotas are by weight and not crab count, this method is how they know when they are reaching their quota limit.

Do they count-up the amount of crabs caught wrong?

Yes, they do, and there was one episode where Blake from the Maverick came in to offload the crab and realized they were 10,000 pounds short of what they had counted and calculated.

With an average weight per crab, it lets them keep a track on how much is in the tanks. That means when it comes to off-loading, they have to cross their fingers that they have a reasonably accurate count so not to exceed their quota.

Which makes you think that they would get heavy fines if they are way over their allocated quota?

It’s very unusual to be so over quota that a fine would be applied. These guys are professionals with years of experience. Mis-calculating how many crabs they have counted in the tanks is rare and it’s unlikely they would be so far under or over for a fine to be charged.

What happens if they have caught too many crabs?

If they have caught and counted too many crabs, they do something called “rail-dumping”, unless they have an agreement with another boat behind them in the line – where they can then give the extra to the following boat.

Before they even reach harbor, they most they might be over by is around 1,000 pounds. At this point they can defer the over-catch to the following boat, or rail-dump the extra weight.

Here’s a comment I read on a forum on how the quota and fines work:

“They get paid their standard rate up to their quota, and a significantly reduced rate on anything over. After a certain amount over (reasonable wiggle room based on counting errors and size estimates) Fish and Games becomes involved for your overfishing.”

To conclude, the authorities won’t be too harsh if the crab count is a little over the allotted quota. If it’s way over, that’s when fines could be applied.

Here’s an example video where they did count the crab wrong on the Ramblin Rose captained by Captain Elliot Neese.

Do they ever eat the crabs they catch on the boat?

If like me, you’ve ever wondered whether or not the crew actually eat the crabs that they catch on the Deadliest Catch, then here’s what I found out.

Firstly, there was one particular episode where Nick from the Wild Bills took some bacon and wrapped it around some crab meat before frying it with brown sugar. It looked really tasty!

There was also an episode in one of the early seasons where the Sea Star crew were shown eating crab on board their boat.

Admittedly, it doesn’t look that tasty, and they only use legal caught crab in these shots.

But, despite what I’ve seen in the TV series, I also stumbled across an Ask Me Anything thread on Reddit with a cameraman who had worked on one of the series. He was asked if they ever eat the caught crab on board, and this is what he said:

“No, they stock their cabinets and freezers with junk food. In this job they need every crab they can get, sometimes they will go days pulling up empty pots, costing them thousands of dollars, so every crab caught, counts.”

This makes sense, as anything you eat will count against your quota. I’ve also seen evidence online which says that taking crabs out of the tanks requires too much paperwork and hassle and getting caught could lead to a fine.

I also saw another episode where Captain Hillstrand on the Time Bandit said the kitchen (boat galley) was as good as anything in terms of equipment and facilities.

It has a big stove, microwaves, fridges and even a modern dishwasher. The crew will eat properly cooked meals on board such as steaks, meals high in carbs and pasta-based dishes.

Preparing, cooking, and then eating a crab dish would be far too much hassle.

Plus, the deckhands are probably so sick of seeing crab, why would they want to then eat them.

So, I think the episodes where I have seen the guys eating crab on the boat was purely just created for entertainment and storyline purposes.

It looks to be a section created on purpose to celebrate big catches and achievements rather than a common occurrence.

To conclude, in their daily work and when cameras aren’t around, they don’t eat the crab that they catch on the Deadliest Catch boats.

Who catches the most crab on Deadliest Catch?

In 2017, an episode aired where Captain Hillstrand of the Time Bandit recorded a record haul in crab pots.

They kept bringing up pots, and each time where hitting numbers of over 600 keeper crabs per pot. There estimated booty was said to be $13,000 gross.

So, there you have it, that’s how they count crab on the Deadliest Catch.

The fourth season aired on April 10th, 2018, and it set to continue on the Discovery Channel. Keep watching the new series to see those hard working guys counting as many crab as they can!

PS: You might also like my investigation into how much the captains on the Deadliest Catch earn each episode and year, including what their reported net worths are.