How Long Does It Take to Get Off a Cruise Ship?

Disembarking from a cruise ship is unlike checking out of a hotel. The only similarity is that in both scenarios, you need to clear and settle any pending financial matters either the first thing in the upcoming morning or on the last evening. Getting off a ship is a complicated process that demands you follow a set of procedures. This can take time.

How long is disembarkation from a cruise ship?

It can take several hours for all the passengers disembark from a larger cruise ship. Passengers will need to prepare their luggage and will then be called by the ship’s crew when it’s their time to get off. From the point crew calls your group, you can be off a cruise ship in 15 minutes on average. But it’s the waiting time before this point that is where the longer time takes.

Carrying your bag and getting down to the relevant deck is what takes most of the time. This is because elevators tend to be crowded. Additionally, there’s always a queue to show your card for the last time as you exit.

Because of occasional delays in passenger disembarkation that can result in the creation of lines, it’s prudent to avoid booking a flight too early the day of disembarking. 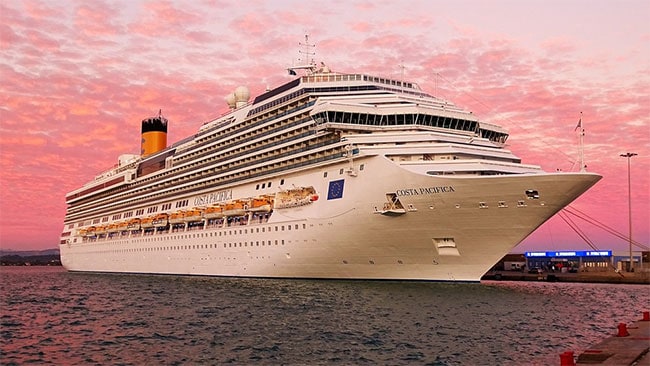 How long it takes to disembark from a cruise ship will differ from cruise to cruise.

How long can you stay on a cruise ship after it docks?

The length of time you can stay on a cruise ship after is docks is entirely down to what disembarkation groups you are in and the time the crew get you off the boat.

In my experience, the cabin stewards will come and open your cabin door, and there will then be announcements asking you to get your luggage and gather at certain points waiting to be called for your exit.

During this time, you will be waiting in a public area of the cruise ship to be called, and bars and shops tend to be closed. There’s nothing for you to do other than wait in most cases.

To answer the question, how long you can stay on a cruise ship after it docks is entirely down to how long it takes you to be managed off by the crew.

Do you have to pay to get off a cruise ship?

By this question, I assume you mean when the cruise ship docks at a location for an excursion. Because, you don’t have to pay to get off a cruise ship at the end of your cruise (obviously)!

Does it cost money to get off a cruise ship? Unless you have booked an excursion from the cruise ship or have paid for priority disembarkation then you won’t have to pay to get off the cruise ship. In many cases you can manage your own trip. Just make sure you get back in time!

When a cruise ship comes into a destination port, you can opt to book an excursion managed by the cruise line. These can be expensive when getting off a cruise ship with prices ranging from $25 to $300 on average, sometimes more.

If you miss getting back onto the cruise ship before it leaves for the next destination you will have to pay your own transport costs to get to port next up on the itinerary.

Can you get off a cruise ship and stay?

This entirely depends on where in the world you are, as the legalities will differ from country to country. You could get off the cruise ship and make your own way home, but there could be complications with immigration.

It’s unlikely that you can get off a cruise ship and stay in another country. Depending on where you are in the world, there could be additional Visa and immigration issues. Please check before you depart if you are planning on getting off and staying in the port.

Did You Know? The average amount of people who can fit on a cruise ship is 6,000 passengers. Click here to see the capacity of your chosen cruise line before you embark on the trip of a lifetime.

We’ve already discussed how long it takes to get off a cruise ship at the end of the cruise, but what about the disembarkation options when getting off?

You have two options when it comes to disembarking the ship – checked-luggage debarkation or express debarkation. The one you settle for mainly depends on how quickly you desire to leave the ship.

No one looks forward to getting off their cruise ship to go home. In fact, too many travelers, this is the saddest day of their vacation.

I decided to look into the average disembarkation times of some of the biggest cruise ships in the world, so you know exactly what to expect.

Here are the disembarkation times for some of the most popular cruises in the world:

How to find out disembarkation procedures on your cruise ship

During your final day on the ocean, the cruise director holds a briefing at the large lounge or the main theatre. Although attending this meeting isn’t the most entertaining way to spend your final day at sea, it is certainly a great idea.

Check whether your in-cabin TV will show the director’s meeting session. On top of that, the most pertinent disembarkation information is usually included in the daily newsletter of the ship. Alternatively, it can be included in a separate memo that’s left in your cabin.

Remember that it is always easier to ask the director a question than having to queue in a long line later on at the front desk.

Did You Know? If you suffer from seasickness then there’s a best place to have your cabin on the cruise to reduce the chances of feeling ill. Click here to see where the best place to stay on a cruise is to help avoid feeling seasick.

Is going through immigration and customs at the cruise port necessary?

Once the ship arrives at the port, local immigration officials will need to clear it before anyone embarks. All ships that terminate their journey in ports in the United States require all passengers to not only fill out customs forms but also show their passports to the immigration officials at the cruise terminal.

It is normal for some passengers to meet with the immigration officials on-board before they get off the ship. Due to changes in rules based on the disembarkation port’s country as well as the nationality of passengers, it is best to adhere to all the instructions given onboard.

Did you purchase some souvenirs on your cruise? If you did, ensure you check the rules and regulations in your country regarding allowances for goods such as cigars, cigarettes, and alcohol brought back from abroad. You might be requested to report the actual value of all goods that you purchased abroad, make sure that you keep all receipts.

If you go over the country’s limits, you might have to pay for taxes on some of the items.

Can you grab one last meal before getting off a cruise ship?

You certain can! Some passengers wouldn’t dream of getting off a cruise ship without enjoying one more ‘’free’’ meal. The million-dollar question is, when and where can you do so? Checking your daily newsletter is a prudent thing to do. It contains all the information you need regarding disembarking including the specific restaurants that are open.

Normally, the buffet should be open and packed, with the last day of a cruise always particularly busy. The same is true for at least a single dining room for you to enjoy one sit-down meal.

On the disembarkation morning, some lines normally have room service. Carnival Cruise Line is a perfect example of a ship that recently added this option.

How long it takes to get off a cruise ship when the cruise ends is the most frustrating part of cruising. I can only compare it to hanging around at an airport before you get a flight. There are lots of people crammed into a space waiting to be called, suitcases in your way, packed elevators, and (occasionally) glum and frustrated looking people.

Make the most it or try to delay getting down to your calling area for as long as you can.