Yachting season can be an amazing opportunity to escape from the worries and schedules of daily life. But it can also bring some frustrating limitations due to the time involved in being at sea, whether that’s too long, or too little depending on your standpoint. For example, many people, the yachting season doesn’t last long enough, but for some crew members it’s too long.

If you’re only interested in yacht vacations in a specific region, you’ll probably have to work within the limitations of that region’s yacht season. But if you’re open to different destinations, you can find excellent cruises happening at almost any time of the year. And if you own your own yacht, you may be able to set sail anytime you want, regardless of the season.

Yachting season in the Mediterranean makes vacations available for about seven months of the year. Summer is the most popular time for cruises in this region when the weather is warm and usually dry.

An increase in rainy weather is one of the main reasons why the season is limited in this region. In Athens, for instance, precipitation is several times greater in December than in the middle of summer.

As the Mediterranean yachting season winds down, many vessels begin to head to the Caribbean to continue offering cruises there. Others spend the downtime docked while preparations are made for next year’s season. Because of this transition, it may be harder to find cruises later in the season.

However, since the fall is less popular, the later months can also be an excellent choice. The crowds will be thinner, making it easier to find berths, and if you’re interested in swimming, water temperature should still be quite pleasant.

Yachting in the Caribbean season

Yachting season lasts about six months in the Caribbean. There may be fewer cruises available in last month or two, as the yachts begin returning to the Mediterranean to transition into the next summer season there.

Since the Caribbean has a subtropical climate, temperatures rarely dip below 60 degrees Fahrenheit at any time of the year, and water temperatures stay a good 10 degrees warmer than that, as well. This is why people from colder climates love visiting this region. When the winter months get harsh, the balmy sunshine of the Caribbean is a welcome escape.

If it’s always so warm here, why is the yachting season limited to six months?

Part of the reason is that the other months of the year tend to be very rainy. For example, in September, Nassau sees more than 15 rainy days in a month, on average. If you went on a cruise at this time of year, you would be more likely to see rain than sunshine.

Hurricanes are another likely reason for the yachting season being limited. Hurricane season in the Caribbean runs from the start of June to the end of November, and although many hurricanes are not that severe, some are.

Considering how unpredictable these tropical storms can be, it’s no wonder cruise lines tend to avoid the Caribbean during this period.

Yachting season lengths in other places

The Caribbean and Mediterranean may be two of the most popular destinations to spend the yachting season, but they’re certainly not the only ones. There’s a variety of other exotic locations you can explore, and since the yachting seasons in these places tend to overlap, you’ll still have cruises to choose from in almost any month of the year.

Most cruises to Australia happen from December to April. This is the same time period as the yachting season in the Caribbean, so if you’re looking to escape some cold weather, you have even more options. Australian cruises often feature excursions in Sydney and other major cities, as well as visits to the Outback.

January through April offer the best conditions for a cruise on the Indian Ocean. Like the Mediterranean, this is a fascinating region with lots of historical sites to experience. Some climates are on the wetter side, such as Colombo, the capital of Sri Lanka, while others are more temperate.

A cruise on the Indian Ocean is likely to expose you to a variety of these climates.

And for the particularly adventurous, a cruise to Antarctica will offer sights and experiences, unlike any others. Most expeditions happen from November to March when ice conditions are most favorable for travel. You’re certain to see rugged white mountains, massive icebergs, and maybe even some penguins.

Whether you’re looking for journeys around the world or closer to home, choosing a yachting season around the globe can take you to an incredible variety of places. If you have a destination in mind that wasn’t mentioned here, it shouldn’t take long to find out the ideal months for travel in that area.

Year-round yachting on your own

Of course, booking with a charter or cruise line isn’t the only way to enjoy the pleasures of the sea. If you have your own yacht, you don’t have to be limited to the schedule of a cruise line or charter booking. You can essentially set your own yachting season length and duration.

Assuming your yacht is rated for long-distance travel, any of the cruise destinations above are open to you. Some people have even lived on their yachts for years at a time, traveling the world with their family… that’s an all year yachting season! 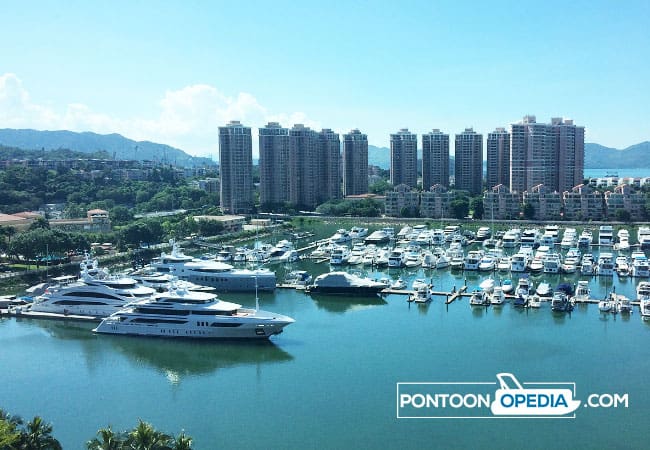 How long the yachting season lasts could be down to you if you own your own yacht.

And speaking of adventure, you don’t even have to let cold weather stop you. Many people don’t realize that you can ride a yacht in winter conditions. It’s a challenging task, but with plenty of preparation and the right mindset, it can also be quite rewarding.

A key consideration for winter yachting is warmth. Since many yachts don’t come equipped with heating, you’ll probably need to rely on good clothing and bedding to conserve body heat. Instead of a big, bulky coat, consider wearing multiple thin layers, as this keeps warm air trapped between the fabric.

Thermal gloves will be helpful for general use, but if you need more dexterity, just do whatever you can to keep your hands dry. A tapered sleeping bag can also do a great job of trapping air during the night.

You’ll also need to put some extra thought into maintenance. Winter yachting isn’t exactly a popular activity, so it can be tough to find a place to fuel up. Keeping your tank topped off will be essential, though, as this helps prevent diesel bug. You should also do what you can to keep your battery full since many engines are harder to start when the weather gets cold.

It is possible to rent or charter a yacht (here’s what it costs), but if you’re looking for an unconventional experience, you may have to negotiate with the charter company. Since the vessel is their property, they may not want you taking it into cold or stormy conditions.

Even if you own a yacht, your insurance company may also have rules about what you can do with it. Make sure you discuss your plans with any applicable parties before doing any winter yachting.

Handy Hint: Ever wondered how long a yacht can stay at sea? I’ve done the research for you and it’s all here.

Making the yachting season work for you

When it comes to yachting adventures, it’s hard to count the number of options available to you. Because of the way seasons in different regions overlap, yachting is possible at almost any time of year.

So, if you’re saving up for a vacation and wondering when to schedule it, there’s no need to worry; as long as you’re flexible, every season is yachting season and it can last as long  or as little as you want!