How to Make a Homemade Pontoon Boat Cover Support System

Nothing is more frustrating that coming back to your pontoon boat and seeing that the cover has sagged, water has pooled, or even critters have managed to get in. Whilst some covers will come with a support system as standard, not all of them do.

For a number of years I used a cheap boat cover and has these exact same issues. Since then I’ve purchased an off the shelf cover support (see which one here) as didn’t have the time to make my own DIY pontoon boat cover support.

But, having seen the question “how to make a pontoon boat cover support system” asked so frequently on social media and boating forums, I decided to investigate it and collate all the homemade and DIY ideas I could find on this one page.

Take a look at some of the ideas and photos below to see what you think.

How to build a homemade pontoon boat cover support system

One of the most common approaches for making a homemade pontoon boat cover support system is PVC piping.

If you are tired of draining all the pockets of water in the boat cover after rain falls, then this could be the perfect DIY project for you to try out.

Here’s an example I found on Pinterest of a homemade PVC frame, built up in a tent shape to offer very sturdy support for a boat cover.

I think this would work very well just by using some cheap 1.5-inch PVC pipe and fittings, but just be sure to cap the ends off.

If you are thinking about doing this yourself, run six tubes of PVC pipe across the boat, side by side with one down each side and one in the middle forming a tent shape. 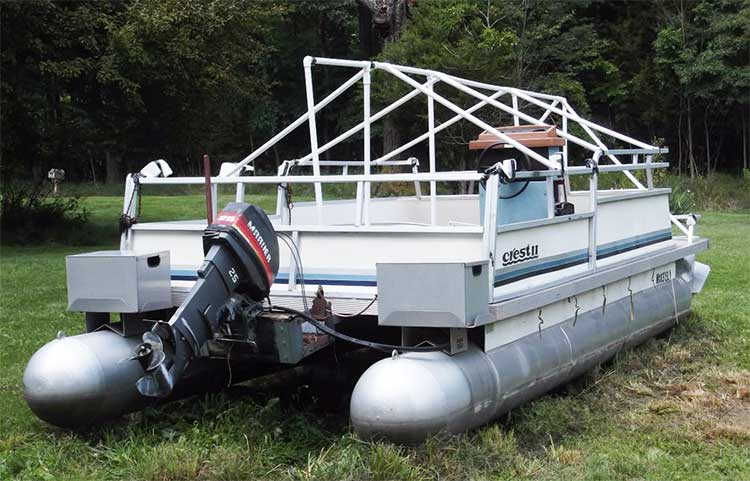 Here’s how the finished project could look before you add the cover.

I’ve seen a report on another forum from a DIY’er who did this and provided this feedback:

“I think I came up with a great way to keep rain water from pooling up in my boat cover. I decided to try using 1/2 inch PVC pipe and fittings. Took 1/2 tees, cut the through side in half to make a cup to set on the railing. Cut 1/2″ pipe long enough to run from the rails to the center of the boat with a curve and glued them into a cross fitting (four way). This made four curved struts that I placed from front to back. I then added horizontal pipes between them down the center. I didn’t glue these together so I can pull them apart and easily store them when not in use. Used my ropes to cross brace from one to the next. Cost me less than $20 including the glue!”

Securing the PVC is essential, and in that photo below you can see that the piece between the elbow and the T is 3 inches, with a slot cut in the T to let it fit over the pontoon rails. In the example below, 2-inch PVC piping is used. 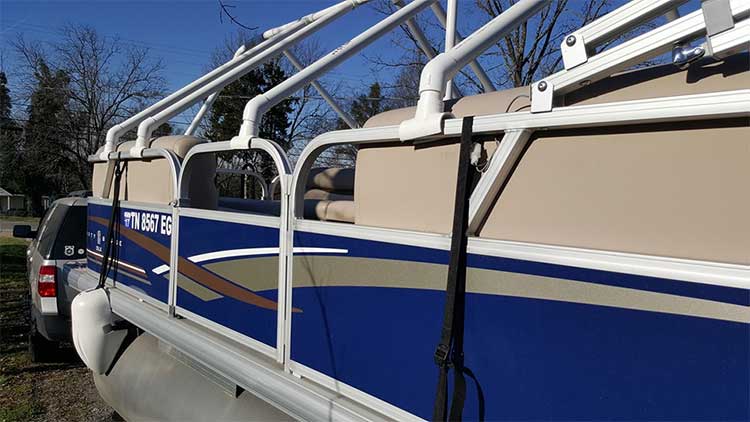 This is how you can clip the PVC piping onto the boat’s railings.

Here’s another social media comment I found online from a guy who used this exact same method:

“After three or four times of bailing out 20-30 gallons of water from my boat I realized the stupid poles that came with my cover simply don’t work. Instead I built a 2×4 frame using PVC piping which is easily assembled and dissembled. No more bailing of water or me, it’s super strong, and is pitched up to let the water run off.”

I also found a video online which shows another guy’s method. It’s not on a pontoon boat, but the process and construction are the same no matter what type of boat you own.

I went to Walmart recently and noticed that they have poles in the boat aisle that could work very well if you want to build a pontoon boat cover support system yourself.

They cost around 8 bucks each, but you could also use expandable shower curtain rods, which will be even cheaper – but essentially look and work exactly the same.

But will they stay in place when the wind and water hit the cover?

Good question, and I actually found someone on Facebook using this exact DIY method. This is what he had to say.

“They expand so you need to stretch them until they pull the cover top tight. That should keep things in place, but you will need to have a small pocket in the top of the cover space for the rods and poles to stick into. It worked for me for one season, but after 12 months they started to collapse down so I ended up buying a complete cover with anti-pooling poles included so didn’t need the Walmart ones.”

I don’t have any photos for these ideas, but they are easy enough to visualise. Here are the two suggestions found via a pontoon boat forum:

“This year we went to Lowes and bought some expandable painting poles. We then put tennis balls on the end of the poles, and it worked like a dream. Total cost to make this DIY homemade cover support system was just under $20 dollars!”

“I also use the tennis ball method but stuck them on top of some old sponge mops I found in the garage which I then cut down to size. They don’t work very well in strong winds, but most of the time provide an adequate solution.”

Pontoon boats are like floating patios, so why not take it one step further and get some patio umbrellas on deck? I’m joking of course, but there is some method to this madness if you want to keep you boat cover up and pitched.

As before, I found someone who actually does this, and I wish they had posted a photo. Here’s what they had to say.

“Our DIY pontoon boat cover support uses two cheap patio umbrellas. We position one at the front and one at the back, then crank them with the handle into the wide-open position. Once in place they are almost as wide as our pontoon boat, and we pull the cover tight over them. So far they have never fallen over and don’t shake in the wind.”

This method requires welding equipment and more work but will be way more secure than using PVC piping or any of the other methods already discussed. Here’s what the response was on Facebook when I asked how to build pontoon boat cover support:

“What I did was weld some steel poles to some old car rims I had laying around. I then built a piece to go across the top of my boat, so that the sides slope down at a pretty good angle to let the rain water run-off. I can still get in the boat and work while the cover is on.”

“The poles that came with my factory mooring cover were a pain, so I bought $6-dollar extendable twist lock shower rods from Target. They collapse down to easily fit inside seats for storage and I can easily raise and lock them to exact height. The rubber tips are also easier on my carpet and mooring cover since there is a wider surface on tips.”

How to stop the cover support poles from sliding

With all of these DIY support systems, one common complaint crops up a lot. Here’s a comment from social media describing what I mean:

“I have a Sweetwater pontoon with a black snap-on cover. I’ve had it for years and there is one major issue I need to tackle. The aluminum support poles I made keep wearing out and don’t stay tall to keep tension on the cover. I’ve bought new poles, tried cover support systems (those are a pain) and just keep having a cover that sags, gets pools of water and just is awful.”

Does that sound familiar to you if you’ve already attempted to make a pontoon boat cover support system?

Thankfully social media and the pontoon boating forums are packed full of experienced pontooners more than happy to offer advice. Here’s a selection of the best responses:

“On your extension poles I use a roll of painters tape or tear a half inch wide strip of duct tape. I extend the poles and then wrap a few wraps around the pole so it cannot slide down. This has worked perfectly, and we have had an incredible number of bad storms here on the east coast.”

“To fix the sliding issue, put the poles to the height you want and then drill a hole through the pole. You can place a small bolt in the hole to catch the poles so that they will never slide down on you again.”

Don’t want to build something yourself?

I hope that these ideas have given you some inspiration. With a few dollars spent and a bit of time you could have a homemade cover support built in a few hours.

There are off the shelf products which you might want to consider though, with the best ones being the Vico Marine range of poles and supports.

If you head on over to Amazon, you will be able to find all the parts you need including the poles, base, and vents – click here for prices. Alternatively I recommend you read my full review of the Vico Marine system, it’s truly exceptional.

In the video below you can see how this cover support system can work.