The Pontoon Fire Pit Table That Lets You Fire It Up!

A few years ago, a new product came onto the market which raised a few eyebrows. It was a portable pontoon fire pit table that let you keep warm on deck.

For a very brief moment in time, pontoon boat fire pits were a huge topic of conversation on the boating forums and Facebook groups, and understandably so.

Some people thought were a great idea, whilst others said it was a stupid concept that would never take on, and in fact was really dangerous.

My view on it is this; the ones that were on sale were fuelled by a 1-pound propane tank and had a safety shut-off valve, so in reality it was really not massively different to grilling on your pontoon. with the main difference being the size, and the fact you tended to place it directly in the middle of the deck.

Obviously if you weren’t careful, especially where kids are involved, then it could be dangerous. As with anything like this, fire on a boat is never going to be 100% safe, but common sense should always apply and keep you out of trouble.

So, are there still specialist pontoon fire pits for sale?

It would appear not, as the websites that used to sell them have since gone offline, and other retailers that were selling them have been out of stock for over 12 months.

But, the pontoon fire pits that were for sale originally virtually the same as the gas-operated fire pit tables that you can buy for outdoor use, so in reality there was nothing that actually differentiated them other than they were labelled for boat use.

You can see a couple of examples below which could work on a boat, providing you have the space.

This one is quite large, so you will need enough space on your boat’s deck.

Powered with propane gas, it has a weather proof aluminum frame with stainless steel components, making it ideal for being used anywhere near water.

It’s a beautiful looking piece of kit and will look great on your patio at home so you can use it whilst on the water and on land.

To see the reviews and prices, take a look at the Amazon listing for this fire pit table.

This one is smaller and cheaper, and so is a lot more portable.

Again, it’s gas-powered, and is constructed from stainless steel, but is a lot lighter than the Napoleon listed above.

At time of publishing this guide, it has exceptional online reviews, all of which you can read on the Amazon website, click here to see prices.

As I already mentioned, you can’t seem to buy these online anymore, and I honestly don’t know why. Perhaps the company went out of business.

Regardless, this is what they looked like when they were on sale, with some information about the features that were included.

This was the pedestal version that used to be on sale, with cup holders either side of the pit.

The one above was the portable pedestal table version and was completely self-contained in a box then set up on a pole and attached into the pontoon deck.

It came with an adjustable flame control, shut-off valve and also had a locking lid for safety reasons. This particular model could be taken down and placed underneath the seats once cooled down and not in use.

The more expensive option was the actual table version which had quite a hefty price tag.

The example shown in the above image was the actual table version and included a 16 inch fire pit integrated into the table. It was 24 inches high and 16 inches wide and looks like the perfect way in which to keep warm on a chilly night.

You also benefited from the extra add-ons not included in the pedestal version such as the cup holders (which you can see in the photo) and storage compartments underneath.

It was very expensive though, coming in at around $1,200 dollars!

Those that did buy one loved it. Here’s just a selection of comments from boat owners who still own one.

“We watch the sun go down with a nice little fire in the middle of the lake. These fire pits are 40,000 BTUs. They are nice when you’re doing a booze cruise at Martini speed!”

“I think this is an amazing idea. Sit out on the lake all night and keep the party going! And anyone that is negative about them has probably never seen a gas grill on a boat which they have been doing for years now.”

“For those that say these are dangerous, what about grills? Should we should stop every manufacturer from putting propane grills on boats with an open flame? No, exactly!”

“We usually just throw anchor in the middle of the lake and watch the sunset. It’s 40,000 BTUs and my wife gets cold fast. We are still on our boat at midnight in t-shirts because of our pontoon boat fire pit – we love it.”

“I am much more concerned about the gas BBQs on boats because they are for cooking which says grease fire to me. The fire pit we use is not for cooking, so you can turn it off when you’re done.”

“We have the portable unit and I also have one that is, yes sunk in the floor. It has a locking lid that covers it when it is not in use. The controls are on the helm. The floor model is 2 inches deep, so it can go into a tritoon and can also have a trailer run under it without catching anything.”

“I recently went on a friend’s boat who had recently installed one, and it sure beats huddling up around the grill on a cold night.”

How to Make a DIY Pontoon Fire Pit Table

I had a little look around the Internet including and online forums to see if anyone had since built their own DIY pontoon fire pit and did actually find some very innovative ideas.

Here’s one example I found on a pontoon boat owner’s group on Facebook. 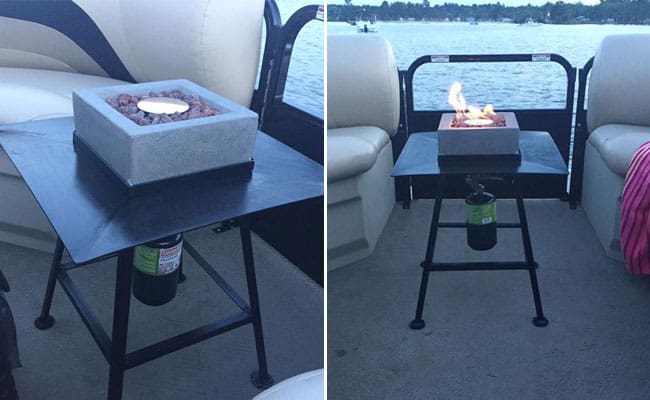 Here’s what a resourceful pontoon owner did in order to make their own DIY version.

Here’s what the boat owner had to say:

“We bought this fire pit from Academy Sports. It’s made for an umbrella hole in your patio table, but we engineered a stand for it to go on our boat for marshmallow roasting!”

“We were very safe, marshmallows were roasted during fireworks show and no one was harmed, pit was placed at front of boat, no gas lines exposed.”

“It’s no different than mounting a grill on your boat!”

I’ve never actually seen a pontoon boat with a fire pit but know that when the original items were on sale, they were extremely popular and did sell out very quickly.

Some owners said that having a pit added two months to their season due to the warmth they offered.

Would I get one?

No, but that’s mainly down to the fact that I have kids, and I don’t believe it would be the safest thing to have on my own boat. Plus, I just don’t have the room!

But, they do look very cozy, and as long as your exercise common sense and are in full supervision of it the whole time, I can’t see why it would be an issue to set up a pontoon boat fire pit table if you want one.

One aspect that did spring to mind was how other boat users might react to seeing this.

For example, in the dark, other boats could see the flames from a distance and pull up closer or call the emergency services if they think you have a fire on board.

If you are going to buy a pontoon fire pit, exercise caution, and make sure that your fire extinguishers have been tested and are working.