Sitting at a waterside cafe in Washington State, I was watching the hustle and bustle of the boats coming in and out. What amazes me about tugboats is how these smaller boats managed to maneuver these large sea vessels into tight spaces in the harbor, and how much expertise the captain of the tugboat would need… I bet they earn their money and pay!

That made me very curious about what an average tugboat captain salary would be, how much they earn in pay, and what their roles and responsibilities must be. It seems to be a really tough job so I decided to find out how much money a tugboat captain makes; here’s what I found out.

The reason why tugboat captains can make such high amounts of money is for some very good reasons. Skippers will need a huge amount of skill and precision when it comes to moving vessels into a crowded harbor or a narrow canal.

Some tugboat captains are even responsible for maneuvering large vessels through ice, particularly in the colder areas of the United States such as Washington State or in Canada.

As well as my own research into how much do tugboat captains make, I also looked at some of the leading career websites to see what they are also saying about annual salary and pay.

For example, on the PayScale.com website they produced this graph showing the pay by experience levels for tug boat captains. 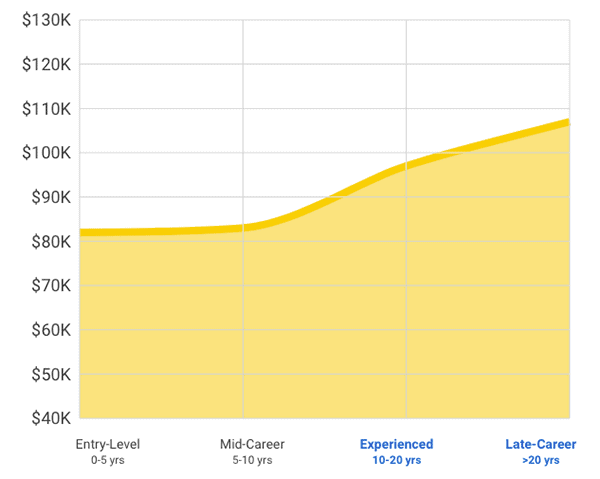 Here’s how much money tugboat captains can make depending on their experience (copyright PayScale.com)

They went on to say that pay for tugboat captains appears to be on an upwards trend. A skipper who has been working for 5 years could get paid as much as $82,000 a year. This research was based on anonymous feedback they received from nearly 30 real skippers working in the industry.

The annual salaries that PayScale.com researched also included bonuses, pay for overtime, and any tips the captain might receive.

As tugboat captains become more experienced they can expect their salary ranges to increase quite significantly. For example, skippers who have worked in the marine industry for a couple of decades could be earning up to $97,000 a year.

And lastly, the most experienced tugboat captain salaries can reach as high as $107,000 US dollars every year. That’s a lot of money, but they really do earn it as I will go into more detail on now.

What qualifications do tugboat captains need?

If this sounds like the type of job you would enjoy and feel that the annual salaries and pay are a good deal, then here’s what qualifications are required.

When it comes to becoming a tugboat captain, there are two varieties: The Mate of towing (second captain) and the Master of towing (first captain).

A Master of towing has more experience and will earn a higher salary. When it comes to becoming either you will need to complete maritime training through a formal maritime academy.

If you complete your formal training you will be awarded a Bachelor of Science degree, as well as a US Coast Guard license (see USCG website).

This qualification could be a bit different depending on where in the world you receive your training. For example, if you are receiving your qualification in America, you will need at least 5 years of experience in the US maritime industry, as well as 8 years as an officer in the reserve unit of the armed forces.

You can also complete other courses such as basic safety training, and watchkeeping designation.

Tugboat captains also gain experience initially as a deckhand and steersman. If you want to become a tugboat captain, you will also have to pass a criminal background check.

How to become a tugboat captain 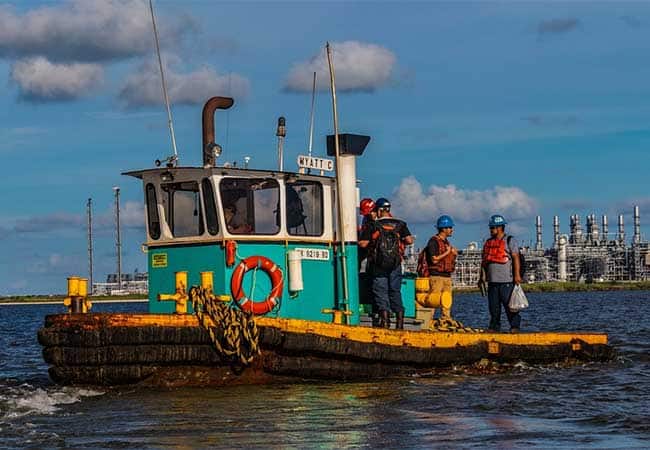 Captains will work in very dangerous conditions and can earn good money as a result.

If you want to work as a tugboat captain, you need to be at least 21 years old or older.

You will also need to be able to read and use the meteorological devices onboard the tugboat. As a tugboat captain, you will need to have extensive knowledge about the potential dangers that you might experience and how to handle these situations.

You can see why this type of role can demand such high pay scales now!

What type of person would make a good tugboat captain?

If you are looking to become a tugboat captain, you will need nerves of steel. You will need to remain calm under pressure and have great leadership skills.

You will also need to be a meticulous person, who needs to be able to read weather patterns and take extensive notes regarding those patterns.

So, if you think that you have these critical skills and personality, then becoming a tugboat captain could be an ideal job role.

What does a tugboat captain do exactly?

As a tugboat captain you will need to be able to tow barges and ships into estuaries, harbours, straits, rivers, and lakes.

You will have to determine the towing speed, and the course of the tugboat, with regards to special knowledge of the wind speed, weather, tides, and currents.

As a tugboat captain you will also have to be able to push and pull barges, to their destination, without damaging the vessel due to reefs, shoals and other dangers that could affect the vessel,

As a tugboat captain, you will need to have great managing skills, as you manage your crew and tell them what to do onboard.

The responsibilities are very wide ranging, with your decisions being critical to safety of hundreds of people… so you can expect to make a lot of money for taking these challenges on!

Working on a tugboat is dangerous!

Another thing that you need to keep in mind, is that working on a tugboat is really dangerous. That is also why tugboat captains receive such high salaries and make so much money.

As a captain, you need to ensure the safety of your crew, but sometimes, even though everything seems perfect, accidents still happen.

For example, crew members are at risk of falling overboard and getting crushed between the tugboat and the sea vessel that they are towing.

Other crew members have reported their fingers being cut off by wire. A soft line which can recoil, can also cut a person in half or take your leg off.

Another danger which isn’t reported often is having your tugboat hijacked by pirates. This is especially a problem in Somalia.

As you can see working on a tugboat can be a very hazardous job and is not for the faint-hearted. Even though these accidents are few and far between they can still happen and as a captain, you are in charge of safety at all times.

What are the benefits of being a tugboat captain?

Even though being a tugboat captain is dangerous and there is a lot of responsibility involved, there are also awesome job perks.

For example, you get to see beautiful scenery, which seems to be changing constantly. You also have quite a bit of freedom in the sense that you are in charge. There are also chefs onboard, which means you hardly ever have to cook.

You also work 12-hour shifts and then the mate takes over, which allows you to sleep and rest. This is quite different from other captains for example on fishing vessels out at sea.

Some tugboats will also have accommodation on board, which could come in handy. You can enjoy new cities and meet new people.

Being a tugboat captain is stressful, but it also provides many opportunities for adventure!

Where can you find work as a tugboat captain?

As a tugboat captain, you can work anywhere in the world.

The best thing you can do is go online and search for companies that are looking to hire tugboat captains. Or you could also work your way up as a tugboat captain, for the company which you are already working for.

As you can see, becoming a tugboat captain is an exciting adventure. With dangers at every corner, you can understand why tugboat captains receive such high salaries.

Now you know what’s involved with being a skipper, do you think how much money a tugboat captain can make is worth it?

Would you be prepared to put the hard work in to take on all this responsibility to benefit from the salary and pay on offer?

If yes, you might want to start out as a deckhand on a tugboat. This can be a great way to get into the industry, and I’ve also put together some details on how much tugboat deckhands can earn.

If you think the dangers aren’t worth it, but still want to be a boat captain, you might be interested in how much other captains can earn. Here are some examples: