What is a Deck Boat and What Does it Look Like? [ THE ANSWER ]

When I started my journey on buying my first boat I boiled it down to two options. Either a pontoon boat or a deck boat. During my research phase I looked into the pros and cons of owning either one, and eventually opted for a pontoon. But I did learn a lot about deck boats along the way and can answer the question “what is a deck boat”, with my answer being below.

Deck boats were created by combining the layout of a pontoon with the hull design of a runabout. They have large open deck spaces, but also the speed that you might want for recreational activities such as water sports, entertaining and fishing. They are quicker than pontoon boats, and more popular with water-skiers, wakeboarders and tubers.

But let’s get into a little bit more detail on the core differences between a pontoon boat versus a deck boat, what deck boats look like, plus what features you get with the latter vessel.

Firstly, deck boats, just like pontoons have large and rectangular deck spaces. That makes it a great choice for those that want the pontoon boating lifestyle, but with a more speed.

They are faster than pontoons due to the pointed-bow hull. This lets them perform at higher speeds. The v-shaped hull on a deck boat is the main difference between this vessel and a pontoon.

Pontoons will also lie flat on the water with a deck sat on two aluminum logs – or three if it’s a tritoon model.

As a result, those that want the relaxed lifestyle of a pontoon boat, but with more speed, will often choose a deck boat versus a pontoon.

Deck boats are powered by either an outboard engine or an I/O (inboard/outboard) drive, but most buyers will opt for the I/O as those configurations tend to re-sell for more money.

The majority of deck boats will have the helm station and control console on the starboard (right hand) side. There will then be a passenger seat next to the captain on the port (left hand side).

Towards the front of the deck boat is where the main passenger seating and entertainment areas will be, versus a pontoon boat, where this will typically be at the rear.

Some deck boats won’t have as much room at the stern, whilst others have converted the motor box into a larger padded seating area for sun bathing and to accommodate for more passengers.

Did You Know? Deck boats were invented in the 1950s on the Texas coast, with the Hurricane Boat Company bringing them to the popular market in around 1974.

When they first came to market, deck boats were intended to be a boat for just having fun with. In more modern times, things have changed, with manufacturers designing them with serious fishing in mind.

Some fishing deck boats have seats on the foredeck to allow for improved fishing, and storage compartments tucked under seats for equipment to be held securely.

Pontoon boat manufacturers try every trick in the book to try and incorporate as much storage and seating as possible, as a result they tend to look useful, rather than attractive.

With a deck boat, you’re getting something that looks far sleeker and sporty.

Whilst manufacturers do look to maximize the space on board, it’s still designed for speed so there will only be so far that they can take the concessions to leisure.

Many deck boats will also have an integrated wake boarding tower, giving a distinct water sports look and feel, and they don’t disappoint on this level at all. You will have more pulling power than a pontoon for sure.

As a fiberglass V-shaped hull, a deck boat will handle in a similar fashion to a similar size conventional boat… and unlike pontoons, won’t have the turning circle of a large bus!

Deck boats offer a stable and comfortable ride no matter the speed, with virtually no bow rise.

Compare that to a pontoon that will easily plane with a full load at less horsepower than a deck boat.

Both pontoon and deck boats are very versatile craft and will suit a family who enjoys days and entertaining, but also fishing fans.

There is a lot of room on a deck boat, but it’s not quite the same as a pontoon when it comes to getting the party started.

Pontoon boats will tend to edge the argument when it comes to space, but what is a deck boat good at?

It’s combining these factors but adding speed on top.

Deck boats do tend to cost more than pontoons, but one thing that they share is how the price is set. On both boat types the engine can be up to 50& of the price you end up paying.

To buy a decent pontoon boat with modern accessories and features, you could spend anywhere between $19,000 to $60,000 dollars.

Advantages to Owning a Deck Boat vs a Pontoon

Below you can see some common examples of the more modern deck boats and what they look like. As you can see, deck boats look like conventional boats, but have the larger deck space for sports and entertaining purposes. 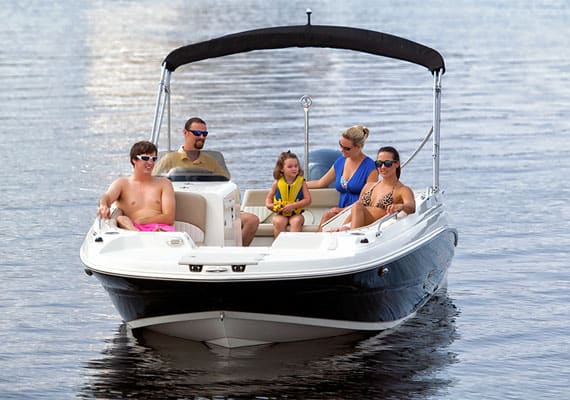 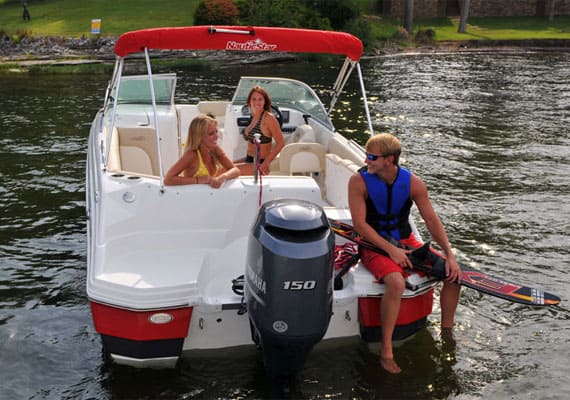 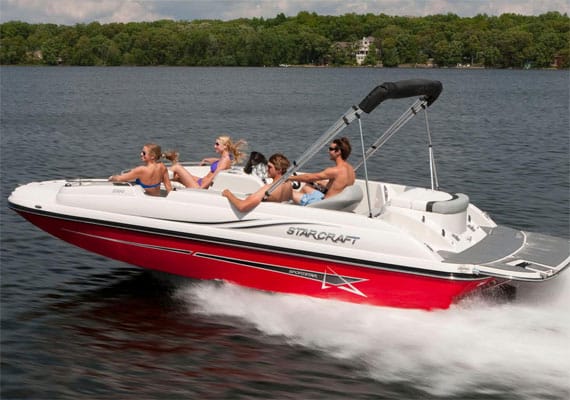 How Long is a Deck Boat?

Most deck boats will be around 22-foot long, with sizes ranging from 18-foot to 25-foot at the maximum.

How Wide is a Deck Boat?

The manufacturers design deck boats to get the best use of space possible, and so will tend to design them to the maximum width allowed on the Interstate Highway System, which is 102 inches wide.

How Much Does a Deck Boat Weigh?

Your average deck boat will weigh between 2,500 and 3,500 pounds, so not that different to pontoon boats of a similar size.

That weight includes the engine, but if you were to add a trailer and equipment into the mix, that load will increase to between 3,500 and 5,000 pounds. You can find more about how much they weight by clicking this guide.

Adding the trailer to the dry weight of a deck boat should mean it’s well within range of the towing capacity commonly rated on most midsize SUVs.

How Many Passengers Can Fit on a Deck Boat?

When it comes to bang for your buck, pontoons over more space per dollar spent. Most of the pontoons you see on the lakes and rivers can easily handle between 10 to 20 people depending on the size and capacity.

Deck boats are still large, and the bigger ones can take a large passenger load, but you won’t see many deck boats that can take more than between 8 and 12 passengers.

That’s not too bad for a multi-purpose boat though!

What is a Deck Boat Made From?

Unlike pontoon boats, where aluminum is the core constriction component, traditional deck boats are made from fiberglass. This lets manufacturers keep the costs down due the complex deck shapes.

However, there are newer deck boats coming onto the market which are now making use of aluminum metals, as manufacturing techniques improve over time.

There is also a lot of composite laminate used in deck boat. This is combined with the fiberglass to produce a more water resilient and rugged material suitable for boating.

Deck boats are then layered with a gel coat resin. This resin can start to blister if the boat is left in the water for long periods of time.

That’s why it’s recommended, just like pontoon boats, to keep your boat out of the water either on a trailer, or with a boat lift.

What is a Deck Boat Used For?

Versatility is the name of the game here, and if you are regular reader of Pontoonopedia, you will have read a lot already about what you can use a pontoon boat for.

With deck boats is essentially the same, just a little reduced space and quicker speeds.

Let’s take a look at each aspect in a little more detail.

Boat boats are great entertainers, but your choice will boil down to the type of entertainment you want to enjoy and offer.

You can set a grill up on board, hang a small slide off the side, and play games in the water on a hot summer’s day, but the key difference will be water sports performance.

For better speeds and pulling, choose a deck boat over a pontoon.

You can still pull tubes and water skiers behind a pontoon boat, but for a great ride, particularly for adults, the deck boat wins out every time.

Pontoons can easily pull less experienced tubers skiers behind in their wake, but if you are advanced it might not be enough for you to have the experience you would expect.

Deck boats come with either inboard engines or 300 horsepower outboards, letting them hit top speeds of between 50 and 70 miles per hour.

That will give you a fast, rolling ride, letting you catch some awesome waves and really make the most of your water sports day.

I prefer pontoon boat for fishing (and you can read why here), but in real simple terms it’s all about the shallow draft.

With a pontoon boat, it’s easier to fish from due to not just the shallower draft, but also the stable platform and extra toom you have to move around in.

That’s not to say deck boats aren’t good for fishing. They are, but if it’s a primary consideration when it comes to choosing between a pontoon versus a deck boat, choose the pontoon every time.

I love my pontoon boat, as for me I value room and space for entertaining over speed considerations.

Don’t get me wrong, there are some very fast production pontoons on the market, but prices of those tend to be in the 6-figure range which is crazy.

Most weekends over the summer I will either be taking family, friends, and kids out, or taking fishing trips with my buddies. My Bennington is perfect for this.

However, if I did want something faster, but would still let me to those types of activities, I would most likely choose a deck boat over a high-performance pontoon.

Perhaps a deck boat will be my next purchase once the kids get older!

I hope this guide has answered your question about “what is a deck boat” and “what are deck boats used for” and you end making the right choice to suit you.