What is a Jon Boat and Why is it Called this Name?

Jon boats (also known as John Boats) are very popular with fisherman, hunters, dock owners, larger boat owners, and those that want a cheap recreational boat for use in shallow and calm waters. But what exactly is a Jon boat, and where does it get its name from?

A Jon boat is a flat-bottomed vessel typically made from aluminum, fiberglass, or wood. They will have bench seats, and depending on the boat size, that can be between 1 to 3 benches. The flat-bottom design makes them ideal for use in calm and shallow waters, with many having outboard motors fitted to them.

The flat-bottom design of a Jon boat lets them ride on top of the water, rather than cutting through like a v-shaped hull boat does. They have an open hull with no bilge so that the ribs are exposed (although you can fit a deck over the ribs for a more stable standing area should you wish).

Cheap to buy, easy to maintain, and lightweight, they are extremely popular in the United States and Canada, and most people will fit an outboard motor to the transom.

Why is it called a Jon boat?

There is no hard and fast evidence over the origin of the name. The exact reasons why it’s called a Jon boat have been lost in the sands of time.

However, there are a couple of theories which are the more likely.

For example, we know that in the late 1800s, flat-bottomed boats were commonly used in the lakes of The Ozarks. The reason for their popularity was down to the ease in which they could be used in the shallow Missouri Valley waters.

These early incarnations of what we know refer to as Jon boats were constructed from pine and green wood and were often only ever used once due to the easy and cheap construction. Once the boat had traversed downstream, it could be easily discarded.

But what about the name and why is it called a Jon boat?

Well, one theory that stacks up well is that is due to the use of jack pine wood to construct the vessel. It could be that over time the name Jack instead became John, then the Ozark John Boat, and then further down the line, turned to Jon without the ‘h’ and dropped the Ozark naming.

Did you know? The German Red Cross use Jon boats during flooding to help rescue people due to the ease of navigating through water in flooded urban areas.

Another theory which isn’t too far apart from the one we have already discussed is that people started to use “flat-bottom skiffs” as a way to describe these boats. And again, that was in The Ozarks back in the early 1900s.

Fast forward to the modern day, and what we now know as a Jon boat will be made from a combination or wholly from aluminum, fiberglass, or wood.

Who invented the Jon boat?

Whilst we cannot be 100% certain on who invented the Jon boat, there is a guy called Charles Barnes who definitely deserves a mention.

Barnes was born in Galena, Missouri in 1878, and helped to define the Jon boat which we know and love today. He was a Jon boat builder, ardent floater, and river guide who is mentioned in publications such National Geographic, the Kansas City Star and Life Magazine.

Today, his legacy is continued on by his son, Bill Barnes who still has clippings and press coverage dating back decades featuring Charles and his Jon boat adventures.

One of the clippings from the scrapbooks suggests that Charles may have invented the Jon boat in 1904. Bill had this to say when interviewed:

“The way he started on these Jon boats is that he lived on a farm near Galena, and it was only a short distance from the farm to the James River. They decided it was easier to catch fish out of a boat, so they built their first Jon boat.”

What are Jon boats used for?

In the 1900s they were used for float fishing, duck hunting and carrying timber. Visitors to The Ozarks in the early days of tourism also liked using them, as the flat-bottom design let them fish easily standing up, with a reduced risk of the boat tipping.

The usage hasn’t changed in modern times, with Jon boats now being mainly used by fishermen (and women) in lakes and by tourists who want a boat that doesn’t take long to master or control.

In simple terms, they make a great utility boat.

In fact, you will see them in marinas and docks as they let mariners, fishermen, and recreational boaters move equipment around, fix docks, check boats and walls, and install swim ladders.

What accessories can you add to a Jon boat?

Jon boats are extremely versatile, with multiple options available for customization and mods. You can see which accessories I recommend by clicking here.

How much does a Jon boat weigh?

Want to know how heavy a Jon boat is or how much it weighs?

It all depends on how long your boat is and what accessories and equipment (such as an outboard motor) you have onboard.

However, there are some very loose guidelines shown below:

How long is a Jon boat?

Jon boats will range in length from 8 foot to 20 foot if you buy from a manufacturer. If you were to build your own Jon boat (and people often do) then the length is entirely down to you.

Jon boats are one of the easiest small fishing boats you can build, because the design is so simple. In fact, in the video below you can see someone building one in just two weeks.

How wide is a Jon boat?

If shopping commercially (i.e. not custom-made Jon boats), then they will be on average between 32 and 56 inches wide.

Why you should buy a Jon boat?

That is one of the biggest advantages to buying one, as you can get started relatively cheaply if you simply want to get out and start fishing or having some leisurely trips down stream or on a lake.

Due to the ease at which you can use these vessels, they are also great for beginners with a range of fishing experience or boating know-how.

They are also very lightweight.

That means you can tow them to the water easily without having to invest in an expensive truck, and with a little help, carry them straight into the lake.

The flat-bottom also makes them ideal in shallow rivers and lakes, so even if you have 6 inches of water below you can run an outboard motor.

Jon boats are also easy to customize, letting you add coolers, live wells, bait wells, swivel chairs, rod holders, side or center consoles, electrics, and a range of accessories without having to make any major structural changes.

In terms of price, they are cheap, but will still vary a lot. Some average prices can be seen below.

Please note, the prices above do not include an outboard motor, and they can be very expensive, sometimes as much as the boat itself.

To summarize, these awesome little boats are great for trying your hand at fishing or boating without having to spend huge amounts of money.

Advantages to a Jon boat (the pros and cons)

Jon boats have a unique hull, and we’ve already spoken in length about the flat-bottom design and how that is ideal for shallow waters.

You can fish from them, do boat repairs and maintenance in a dock with them, have a lazy day out on the water in them, and much more.

Here’s a summary of what I believe the advantages to be:

And the list above wouldn’t be complete without a few disadvantages so here goes:

Are Jon boats good for fishing?

Absolutely they are. They are really good in quiet lakes and shallow water and are used for hunting too.

If you do want use one for fishing, you will need to make a few adjustments and custom changes (unless you buy one direct for fishing purposes).

Fishermen will add rod holders, coolers, and replace a bench with a swivel chair to make fishing easier.

What type of Jon boat should you buy?

Whilst Jon boats are renowned for their flat-bottoms, there are some variations on the design. Some have tunnel hulls, and some have modified v-shaped hulls.

So, which should you buy?

Jon boats with tunnel hulls let you pull the outboard motor up if you need to. This is due to the small area that comes up from the bottom of the hull. 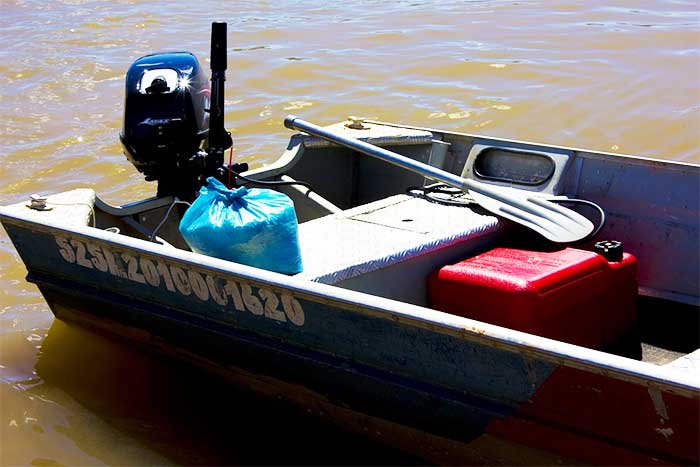 In this photo you can see how easy it is to pull the outboard motor up and out of the way of obstacles.

Having this functionality gives you a lot more control over the motor, pulling it up and out of the way of common obstructions such as rocks and logs.

If you are going to be using your boat in choppier waters, then opt for the v-shaped hull design. It will let you navigate through rougher waters easier as you can cut through small wakes and waves.

Who makes the best Jon boat?

This is tough question, but there are certain manufacturers you should check out and test before you make a purchase. These include:

Go visit a few stores and see which manufacturer and model would suit you. I would also advise talking to other Jon boat owners near your local lakes and rivers to get some real-world advice and feedback.

Are Jon boats easy to maintain?

Yes, they are very easy to maintain and repair, as the design comes with no complex components or shapes.

It can depend on what your boat is manufactured from, as wooden Jon boats will need a little more maintenance, care, and attention for obvious reasons.

The aluminum models won’t rust and corrode and won’t let water in.

If you do decide to buy one, I would recommend that you invest in a boat cover though

As you might have guessed, this website was started due to my love or pontoon boats. However, over time I’ve started to publish content about a wide range of boats that I use, with Jon boats being a particular passion.

I hope this has given you a great start to knowing what a Jon boat is, and why it’s called the name it’s been given.

Please navigate through the rest of the website for Jon boat accessories, insights, plus more hints and tips.