Seagulls, I honestly hate them.

Around 12 months ago I had an infestation of them and they seemed to think that the top of my pontoon Bimini is their own private meeting place. They would end up pooping their mess everywhere.

They also thought it was their meal time every time they saw me firing up the grill or taking our packed lunches from our cooler.

I learnt very quickly that seagulls are creatures of habit. Once they land on your pontoon boat and like what they see, they are going to come back again and again, and next time will tell their friends.

My wife asked me to find a humane and practical way to keep seagull off my pontoon boat and Bimini.

With my wife’s shouting ringing in my ears, with clear instructions not to harm them in anyway, I set about looking for the best way to keep seagulls off our pontoon boat.

Here’s what I found and tried out, plus some comments and solutions from other pontooners with advice on how to deter seagulls (rats with wings)!

My preferred recommendation is the ScareGull sweep (view on Amazon). I’ve had one now for 12 months and it’s worked like a dream.

All you do is clean the poop off your pontoon boat up and then install it up top. The rotating action discourages seagulls from landing on your Bimini and they fly away, find a new place to sit, and won’t ever come back.

This seagull sweep requires no power and rotates in wind, with the end results being that the seagull don’t land or end up pooping on my enclosure or Bimini.

You can put it up on a Bimini top or a towing tower. In fact, it’s so easy to fit, you should find somewhere on your pontoon boat where you can place it.

It removes easily too, so you don’t have to have it on all of the time. Have a look at it on Amazon as there are loads of photos on the website showing the different types of mounting positions you can fit yours on.

If you have ever seen other pontoon boats with a wire type rig on top, which is quite long and moves with breeze or motion then it’s probably a Bird B Gone spider device (view on Amazon).

I’ve not used one of these, but my buddy swears by his. You can also see a photo from my buddy lower down this page where he’s already fitted the product to his pontoon.

It’s designed to stop seagulls and other birds nesting and roosting and has stainless steel arms that move in the wind.

The motion creates a visual distraction which birds hate and won’t come anywhere near it. You can buy it in various sizes too, so the larger your pontoon, this is going to be the best deterrent.

It doesn’t harm birds and it won’t harm your boat passengers either.

I’ve personally not used it, but have received great feedback on it.

Another cheap and supplementary solution you might want to try is a plastic owl.

I tried this before I bought the seagull sweep, and it worked to a certain extent, as in it kept seagulls off the Bimini, but not the areas of the boat where they couldn’t see it.

Owls like to eat other birds, so they stay away when they see this. Mine was hung on a bungee hooked to the Bimini top and it moved around with the wind.

Buy the right type of plastic owl though, as some owls I think are scarier for seagulls. Mine had bright and very shiny yellow eyes. He looked mean. Seagulls hated him.

The one I bought is also UV and water resistant, so if you want to try this, take a look at the exact same owl I bought on Amazon.

It does look kind of ridiculous though when on the top of your pontoon!

What Other Pontoons Say About Seagull Deterrants

Given this seems to be quite a wide-ranging problem, I asked other pontooners what they thought. From what I discovered, it wasn’t just a problem with seagulls sitting and pooping on pontoon Biminis but also on boat lift canopies and covers.

Here’s a short selection of comments with a couple of photos too showing the anti-seagull methods that pontoon boat owners have been using.

“The first time we were on the lake this summer we saw somebody who put a bunch of CDs on a rope and then tied it from each corner to his pontoon Bimini top. It looked weird with the CDs but with the slight breeze they were reflecting like crazy.”

“We use the Bird B Gone Spider on our pontoon boat and love it. So far so good, and no more seagulls have decided to have their own boat party on our Avalon. You can see a photo of what it looks like in action below.” 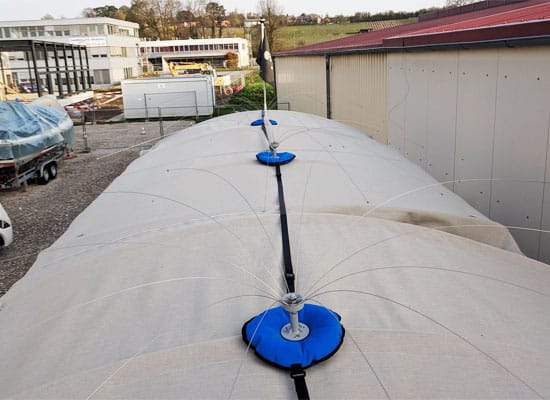 This is the Bird B Gone device in action on a pontoon boat cover and top.

“I also have the Bird B Gone seagull scarer and have been using them for four years now. It’s actually very easy to store when not in use, and I simply close it up and stick it in a noodle so it doesn’t get damaged.”

“Just like you sometimes see on municipal buildings and stores, you can use bird spikes. I’ve seen someone in our marina do this when their boat is docked. I am not sure what they do when the pontoon is underway though as touching them looks like it would hurt!”

“I just bought some shiny flags to tie up and it looks horrible! I would much rather use an owl or one of those seagull scaring devices now I’ve seen what other people use. I didn’t even know that they existed!”

“You can see what these pests have done to my boat cover over the last few weeks in the photo! Man I hate them so much, and this pooping mess took me 2 hour to clean up so looking for anything to keep seagulls off my pontoon cover.” 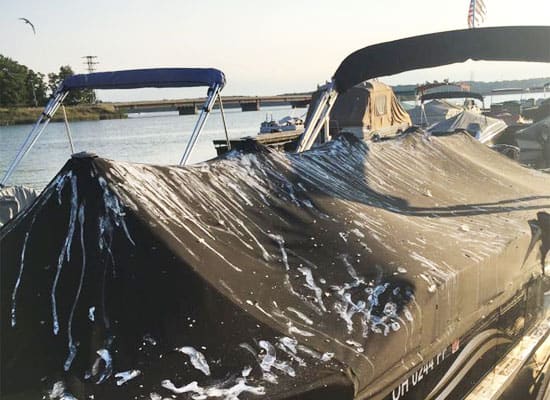 This is what can happen if you don’t scare seagulls off your pontoon cover.

“I would think some sort of fake predator that seagulls would be scared of, mounted near the area where you get them sitting most. We use a plastic owl on our front porch to keep the swallows away and it works.”

“I have seen some pontoon owners lay rubber snakes around on the boat deck when it’s moored up. My problem is a hate snakes, even rubber ones so will be trying the fake owl method out first before trying the Bird B Gone product.”

How to Clean Seagull Droppings from Canvas

Now you’ve hopefully bought the right type of seagull deterrent from the options and suggestions shown above, what about cleaning up the mess and poop left behind?

The best soap and method I found to clean up seagull droppings on a canvas cover and my pontoon Bimini was simply lots of water and a soft brush first.

Once that initial part of the job was done to remove the larger poop and mess I then worked up to a bucket full of Dawn dish soap and water with scrubbing brush.

That should remove everything, and then rinse well for the finish.

Above all, always start with the least harmful or abrasive method first before you go in too hard with soap and brushes.

Whilst it might be tempting to harm seagulls, you could actually be breaking the law if you do so.

When conducting research for this guide I had many comments which I have deliberately not included from other pontooners who recommend catapults, guns, and an Alka-Seltzer method which I am not going to describe here.

Honestly the best option is to use a deterrent.

If you harm and kills these birds, chances are they are still going to come back.

By having a solution in the form of an anti-seagull device on your pontoon boat, you won’t have to put up with the problem in the first place.