Pontoons vs Tritoons – What’s the Difference & What’s Best for You?

It’s an epic battle that continues to range on in and amongst the wild and watery west of lakes and rivers across the United States and… ok, so I’m a bit over dramatic here.

But there is a more serious point to be had, as the decision to be made between buying a standard pontoon boat or alternatively a tritoon isn’t always as straight forward as it should be.

In real simple terms, a tritoon has 3 tubes instead of the standard 2 that you find on a pontoon boat, but the differences don’t end there.

Whilst a pontoon boat can be referred to anything from a floating wooden deck tied to a bunch of 40-gallon drums going all the way up to a high-performance boat with leather coaches with a 150hp motor, when we think of pontoon boats the image below is what we typically have in mind. 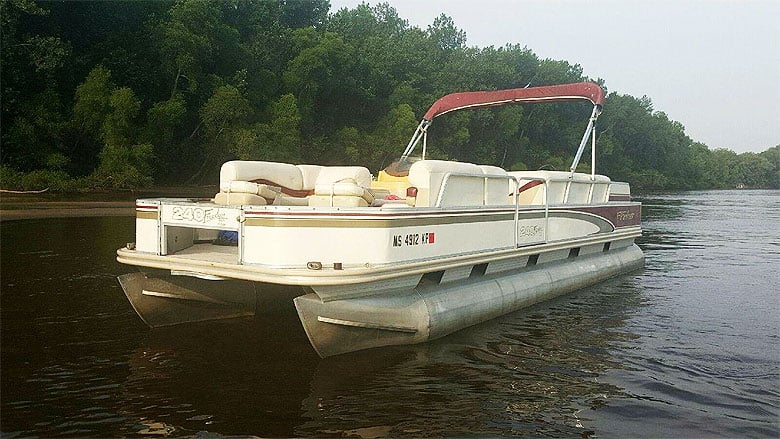 An example of the standard and classic pontoon boat design.

Did You Know? The first modern pontoon boat is credited to a rural Minnesota farmer who tied a wooden deck to a pair of aluminum cylinders. Things are very different today!

Now the thing about pontoon boats is that they are inherently less efficient than typical boats, and that’s primarily due to their shape and design.

There is a reason that some of the fastest boats in the world aren’t shaped like pontoons. They are not designed for insane speeds over massive waves but rather for moderate speeds on relatively calm waters.

What tritoons do is take the classic pontoon design and optimize it further for something that actually might perform a lot better. Don’t get me wrong though, you still aren’t going to get a performance boat if you choose a tritoon – far from it.

And this is what a classic tritoon would look like, notice the difference? 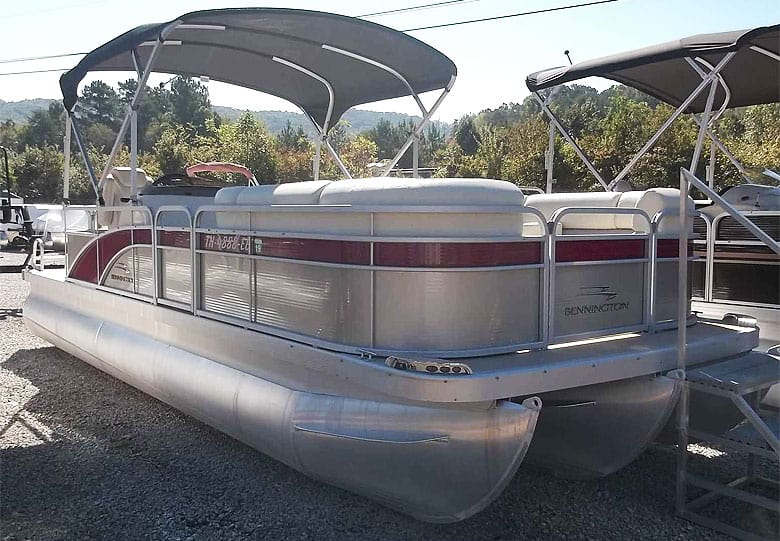 See the 3 tubes? That’s what makes this a tritoon.

But let’s get a little bit deeper into things, where I explain the differences between a pontoon and tritoon boat in more detail, and then end on some questions and statements which should help you to decide what’s best for you.

What is a Pontoon Boat?

A pontoon is a boat with two aluminum cylinders (pontoons or tubes) fixed to a deck. These boats are synonymous with a relaxing days cruising at a sensible pace across local waterways.

Pontoons are not really designed to pull around wake boarders, tubers and skiers across the water at blistering speeds, but can still be used for this purpose depending on the power of your particular model and engine.

The essence of a pontoon boat is best described as something for relaxation and reflection on their lounge like deck, with possibly some fishing trips thrown in.

This idyllic island of calm can be quickly shattered as soon the water starts getting a bit rough or if a powerful boat speeds by and throws up a large wake.

Herein lies the problem with a pontoon, it is a purpose-built craft that operates in a very narrow band, any major deviation from this and it is completely out of its depth. For example, I would never even consider taking one into the ocean, and you can find out why by clicking here.

What is a Tritoon Boat?

As the name suggests, a tritoon has three aluminum cylinders, and where a pontoon offers a slow, easy going pleasure cruise, the tritoon is a more precision engineered and high-powered machine.

Whilst tritoons have been crafted in the image of a pontoon, they don’t have as many of the shortcomings that I’ve highlighted earlier in the pontoon boat versus tritoon argument.

A tritoon is far better for pulling water skiers and tubers and is more than capable of throwing up the kind of wakes that makes a pontoon boat wobble with uncertainty on its two little pontoons. But, it’s still not going to be great at handling in tighter areas, so try before you buy!

Tritoon boats have a lot more muscle and can hold more people due to its added buoyancy that the third tube brings.

If I were to compare the two using a car analogy, a pontoon will be a soccer mom’s SUV, and a Tritoon would be a Ford Mustang.

Stripping it back to its more basic of comparisons, the tritoon is a three-pontoon version of the standard pontoon boat. This added pontoon is what gives it the ability to have a more powerful engine and carry greater loads.

Which is Best: Pontoon or Tritoon?

As mentioned above, a pontoon is better if all you want to do is spend long relaxing afternoons on calms waters with the family, you can use it as a swimming platform, it can host small parties and you can even throw a barbeque on the deck.

It is essentially a moveable, floating platform, and I’ve even heard it referred to as a living room on the water. I wouldn’t even consider spending out more money on a tritoon boat if that’s all you really want to do.

A tritoon is designed to have the kind of increased performance that allows it to cater for those who prefer an adrenalin rush; you can push them hard and fast!

Piloting a pontoon is not a very complex process as the current tends to have the final say on any manoeuvres. Obviously, you can steer it, just don’t expect to have the type of handling you would get from a speed boat.

With a Tritoon though, you have a much more hands-on approach as the extra pontoon improves the handing of the boat. If you decide to go in a specific direction, that’s where you will go, the water has no say in the matter. It also has a much tighter turning circle than its 2-tubed cousin.

Who doesn’t love a bit of tubing and water skiing?

If this is important to you, then you can still do it with a standard pontoon boat. I’ve written extensively in the past about pontoon’s pulling skis and pulling inflatable tubes behind.

But for real power and thrill rides, a tritoon is going to give you extra; and then some.

If fishing is your thing, and you’re going to be doing it regularly, then stick to a standard pontoon boat.

I’ve found it hard to get tritoons into tight spaces, and a trolling motor for fishing purposes might not have the right amount of power you need in shallow waters where you need slow speeds.

But having said that, if you are fishing in deep and large lakes, then it’s a tritoon all the way. They are a lot more stable in rougher waters and are going to stand up better when in the wake of something a lot bigger than you.

You also have the added benefit of being able to get from one fishing spot to the next one in double quick time due to the speed available… perhaps giving you more time to do what you love; fishing!

This is so often over-looked, and understandably so.

People get excited about buying their new boat, get their credit card out, pay for it, and then have to think about the reality of storage and trailering.

With a big tritoon you are going to need a larger trailer, and possibly something with a special braking system due to the weight and mass at play. Your SUV might not even be able to pull it (you can read more about SUVs pulling boats here).

You will also need a larger launch to set-off from, and that could restrict you to the lakes and rivers that you want to take your boat onto.

And of course, where are you going store it?

Will you have the room at home or elsewhere to park up the trailer and boat? It’s worth thinking about far in advance before you buy.

The tritoon is more expensive, not only because it has an additional pontoon, but also because it has a larger engine due to this the extra pontoon. Cost is usually the only factor that is considered when a buyer is deciding between the two.

It makes sense for you to buy a tritoon due to its increased stability, but if you only take your pontoon out to small bodies of water then stability is not really going to be much of an advantage.

In summary, the tritoon is best for someone who wants that extra level of performance.

Personally, I think if you want performance, go for something that’s actually properly designed for speed and handling, rather than a pontoon boat with an extra tube, which is essential what a tritoon is.

The beauty of pontoon boats is their multi-functionality, whether that’s pulling your kids on inflatables at a reasonable speed, a spot of fishing, or some much-needed down time.

Ultimately, it’s your wallet that will make the decision. If you want a pontoon boat, have money to burn, and need that extra speed and handling then for sure, a tritoon will work.

But for most pontooners, and I think I speak for many of them, we’re just fine with the speed and performance of our standard two-tubers!