There are many different types of underwater LED lights for pontoon boats available on the market right now. Some are best for fishing, some for entertaining, some come as individual pod units, some as strips, some as rope lights, and like most things in life, some are better than others.

Whilst I don’t have pontoon boat underwater lights installed on my Sweetwater (yet!), it is something that I currently looking into. Over the last 3 months I’ve spoken with other pontooners to see what set-ups they have, spoken to manufacturers I have close relationships with, and asked a few questions on boating forums.

What that’s let me do is put together a guide to the best underwater LED pontoon lights that you can buy right now, with some selections dependent on what you want to achieve.

I hope it all helps, and you can see those recommended products below, and then scroll further down for some common questions pontoon owners are asking about the kits.

The most commonly installed underwater lights for pontoon boats will be what I call the “puck style” – purely down to the fact they look like a hockey puck as you can see in the images shown below. They integrate really well into pontoons and look good too.

The leader in the market is a brand called Lumitec. They sell a range called the SeaBlaze which have the best reviews on Amazon. But, be prepared to pay a little more money compared to cheaper underwater lights.

There are two choices you have here. You can either purchase the non-dimmable versions which are a little cheaper or go for the models which offer cross fading and dimming. You can see those both listed below:

Each variation comes in blue, green, and white colors.

Why are they more expensive though?

Well, it’s all about quality.

They are made in the USA by boat owners, including pontoon boat fanatics. They are tested and assembled here to the highest of standards and are guaranteed to last – whilst offering an insane amount of lumen coverage.

You fit them 6 to 12 inches under the water line of your pontoon and are transom mountable using just a half inch hole.

The cheaper alternative would be the Jiawill products on Amazon.

The best pontoon underwater lights on a budget

And now for a budget recommendation, which I’ve seen in action only last weekend on a Bennington. They don’t look as good as the puck style, but you can pick up packs of them for way cheaper.

The ones my friend’s Bennington has installed are the Partsam kits. Originally designed for the automotive industry, they work just as well on boats, and are fully waterproof for underwater usage.

You can buy them on Amazon in packs or 2 or 4. Here are the latest prices on the 4-pack.

They are not as bright as the puck models, but if you’re just starting out and want something on a budget, then there’s no reason not to try these out first. You can always upgrade at some point in the future.

One product I saw about a year ago is also worth mentioning.

As with all my recommendations, they can be bought from Amazon. They are waterproof and come with a 3M backing tape.

You might also want to buy some 5/8″ clear tubing to put them in and then seal the ends with silicone as they won’t be great underwater otherwise.

That can be a bit if an ordeal, but the results are well worth the trouble as you can place these LEDs the length of your boat for a really stunning finish.

Of all the recommendations on this page, this product is by far the easiest to install, whether inside or outside of your pontoon boat.

If you are looking for a real party vibe, with rope lights that can stretch under the deck, then the recommendation here would be the RecPro under deck lights on Amazon.

They don’t sit underwater, but instead just under the decking. Simple to install, they still will give off the impression that you have underwater lighting, giving off a continuous neon glow around the bottom of your pontoon boat.

This kit gives you 18 to 20 foot of rope lighting and is ideal for pontooners who want to make a great impression at dock or the next pontoon boat party.

If you don’t want something for decorative purposes, but instead want a simple underwater LED light kit that you can drop into the water to attract fish, then I recommend this deep drop 1000 lumens bait finder product on Amazon. 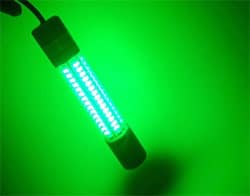 I recently went on a fishing trip with some buddies who used this. It works really well, and certainly attracts the fish. You could hear the minnows jumping out of the water seconds after dropping it.

These lights are perfectly suited for both saltwater and freshwater. Freshwater fish love the lights as well as they work in both in lakes and rivers; fresh or salt it will attract the fish no matter the species.

You let you about 5 to 10 feet into the water and it lights up like the 4thof July.

Choose the green version, as that color is best for fishing, and I explain why further down this guide I the FAQs section.

Want LEDs that pulse in time to music?

And if you are hear because you want to get the party started, then a new product has recently come to light (no pun intended) that offers LED lighting inside of your boat that pulses in time to music.

It’s the OPT7 boat interior glow LED lighting kit and is insanely innovative in the way that it works. You can turn your pontoon is the party barge you always wanted, almost like a nightclub.

It can be plugged straight into the fuse box and includes flexible strips and a couple of remotes. The bass-activated technology pulses the 36 LEDs in time to music and beats, with brilliant colors.

Are underwater lights good for fishing?

Underwater LED lighting has increased massively in popularity over the last couple of years, and it’s not just an accessory that helps to make your pontoon boat look cool.

Fishermen are now also looking to install them too, as they can be very beneficial for fishing?

Well, it’s because lights can attract bait fish at night, but are some colors which are said to work better than others which I will come onto in a moment.

LED lighting also lasts a longer than traditional lights, with many kits offering over 40,000 hours of life. As a fisherman, choosing LED can save you a lot of time and money over the alternatives.

They also withstand a lot more punishment than traditional light bulbs, as they are more shock resistant and can put up with heavy impacts. If you are fishing from your pontoon, you know that rough weather can hit, and LED will give you an advantage here.

LED lighting also draws less power from your pontoon’s battery, meaning you can stay out fishing longer than you would in other circumstances – and who doesn’t want to spend more time fishing!?

And now for more details on the best colors for fishing. The general consensus amongst the fishing community is that white and green lights are the best.

This is because these colors have the best penetration in water, and even in depths of reduced visibility, it will make the water look clearer.

To conclude, underwater led lights for pontoon boats aren’t just great for making an impression. They can also be a great way to improve your fishing experience.

The answer to this question depends entirely on where you, as rules differ from state to state around the US. My advice to you is to check your local state laws before you decide to purchase, otherwise you could be left with some LEDs you can’t use.

As a general rule of thumb, LED lighting under the pontoon boat should be ok as long as you are stationary and docked.

It’s when you’re underway on the water that it changes. Here are some comments from other pontoon boat owners who recently had this very same discussion:

“Every state can make additions to the rules, but the United States Coast Guard makes the rules and trumps all others. It’s only legal to have your running lights on while underway. For example, an anchor light while anchored.”

“Docking lights are just that for docking. All other lighting is a questionable gray area and colored lighting such as blue might indeed be against the law. I do believe that Florida is a state with blue light laws that you should check into.”

“I’m not sure what the law in Louisiana is but we have them and cruise with them at night. We have not had any issues with the police so far. We have passed them on several occasions.”

“We are in Colorado and have not had issues with our blue lights while in motion. Green is another story though as these could be confused with navigational lights so it’s a big no-no in our area whist moving through the water if installed under the pontoon.”

To conclude, you really should be checking your own local legislation before you even think about buying anything from my list of the best underwater pontoon lights.

How to install underwater lights on a pontoon boat

So now you have decided which product you are going to buy, and have checked the law in your state, the next thing to consider would be how to put underwater lights on a pontoon boat.

For full disclosure, I don’t have underwater pontoon boat lights on mine, so have never installed or fitted any personally.

What I would like to do here is refer you to some of the better tutorials that I have found on YouTube and Facebook. After all, seeing how to install the lighting kits visually will be far better than be trying to relay second hand instructions in text here.

In addition to the video tutorials above, I also saw a guy on social media who had bought some new underwater led lights for pontoon boats but wanted to mount them a little differently.

Here’s what he said:

“I wanted to add some underwater LED lights, a new transducer and some new mounts for them. I ended up purchasing a sheet of 12×24″ piece of aluminum and had it cut and bent to the shape I wanted. Then I had a local company weld them on. They also added some extra pieces and some stand offs for my ladder so it wouldn’t hit the lights or bracket. I wired everything up and just need to do some wire ties and then I will be ready to do some night fishing very soon. On the last picture you can see the shape of the bracket. I put a 10-degree downward angle on the brackets so the lights would shine down.”

Sounds like a pretty solid solution to me and I can see how this would work really well – check out his photo here.

To get this effect, he bought the TH Marine underwater LED lights on Amazon – you can see the prices here.

Underwater LED lighting can transform your pontoon boat from being just another boat on the water into something that looks and feels like a proper party barge.

But it’s not just the entertainment and look they work well for. For fishing trips and as bait finders they can also be just as effective.

No matter what your purpose in installing them, they can be a little tricky to fit if you aren’t particularly practical. But almost all of these best products come with installation instructions and there will be a video explainer on YouTube should you get into any difficultly.