In today’s post I wanted to showcase some amazing inflatable pontoon boat modifications and customisation projects that I have seen in person, and online. I have tried to credit the boat owners where possible, but in some cases, I’ve not been able to ascertain who was responsible for the mods and changes shown in some of these images, so if that’s you, I do apologize.

Tip: For more inspiration, including some of the mods shown on this page on a dedicated Facebook page for inflatable pontoon boat modifications. Join the group to upload and share your own mods.

This inflatable pontoon boat modification was seen on Facebook, where the user has added a foot pedestal platform to act as a casting platform when fishing. I love the way it looks, and from what I read online it works like an absolute dream. And you can see why in the photo below. 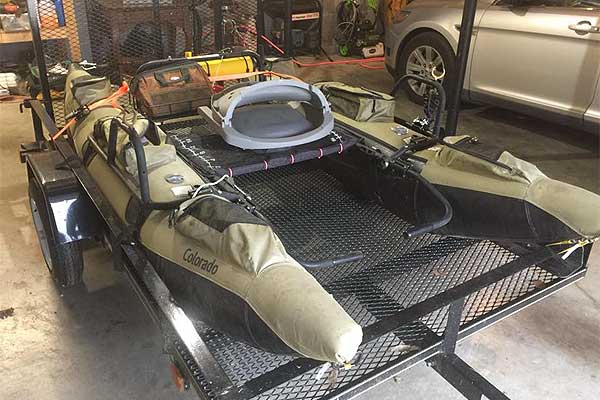 Swivel Seat with 7 Inch Pedestal on a Tamarac

In this modification you can see a swivel seat with a 7″ pedestal, oars, and dry storage section added, with the factory-installed seating having been removed completely. By all accounts, the pedestal was eventually removed as it made rowing very awkward. I can kind of see why that might be the case looking at the photo below. 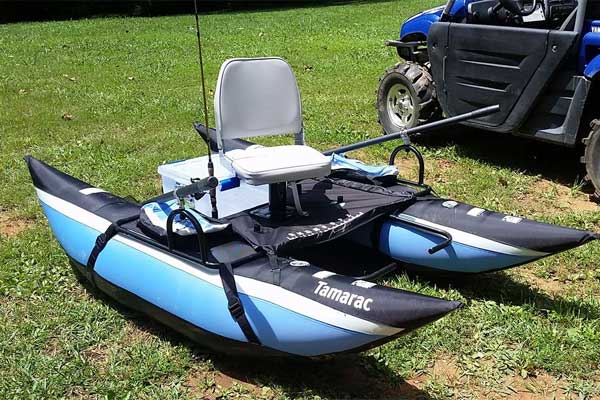 Whilst strictly not a modification, it’s still worth including purely due to the ingenuity and creativity. As you can see, this inflatable pontoon boat owner has built their own trailer, so he can load up three boats in one go for transporting. It still has some work to be done, but looks awesome so far. If you want to buy a trailer or carrier for yours, take a look at my recommended accessories section as I feature a very cheap, yet robust one in there. 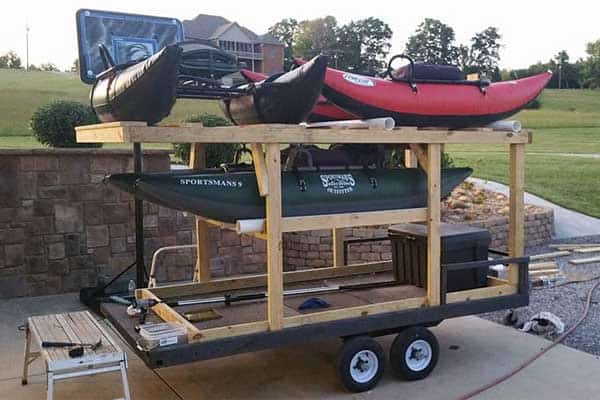 Seat, Rod Holders, and Rear Storage on a Colorado XT

In this awesome video, we see a Colorado XT owner make some fantastic modifications including mounting a trolling motor on the front for better balance, and to make room at the rear for space for lake fishing accessories.

Due to the motor mount placement he has also had to add a rotating swivel seat so he can access the battery, cooler, and motor more easily. Then at the rear he has mounted fishing rod holders on the back of the seat as well as including battery and cooler strapped down at the back. Looks very cool, it’s a great job!

In this next video, we see a swivel seat being added again, which has been raised up around 2 inches. There is also a modified trolling motor, plus the transom has been extended in order to center the motor.

A stripping apron has also been placed at the owner’s feet position with more room made in order to land fish easier.

Not 100% sure what I think about this one, where you can see a flat wooden deck added to the boat. Instead of a chair and platform as you would normally expect, instead the chair has been taken out completely with a larger platform set across the whole frame.

It’s definitely crazy, and looks bizarre (and I think that might be the whole point), but I can see how it could work quite well. I am just not too keen on how it looks personally. 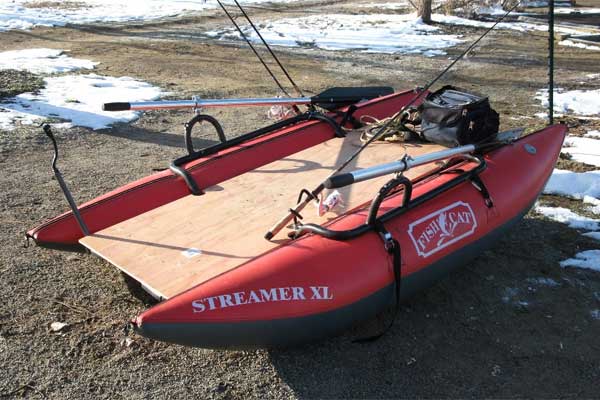 There have been a lot of modifications made to this Colorado XT inflatable pontoon in order to convert it into the ultimate fishing machine… and I tend to agree. I would love to get out on the river or lake in this bad boy!

The shaft on the Minn Kota motor has been shortened to 35 inches, with the head being reversed and mounted as stern drive instead. He has then adapted the foot controls and placed a fishfinder onto a Scotty mount. If you look closely you will see some other mods and hacks that have also been done – great work! 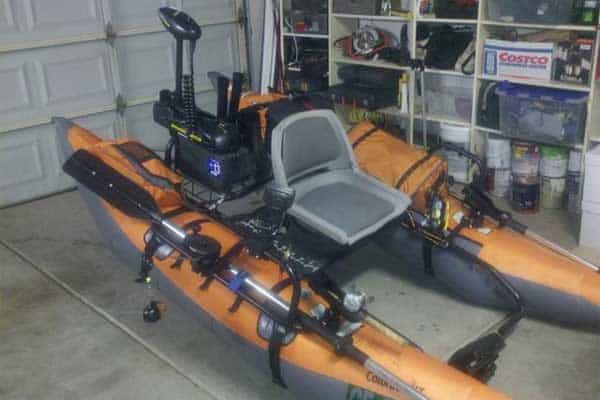 In the next video you can see how the boat owner has improved and added fishing rod holders using a DIY PVC set-up. I love this customization project, and it’s something I would like to try myself! It’s easy to see how everything was done, so watch the entire video from start to finish.

It’s also worth subscribing to this guy’s YouTube channel as I believe he will be adding more videos with additional inflatable pontoon customization projects in the future.

Here’s another video, albeit a little shorter this time, but in the 80 seconds you get to see close-up modifcations and additions including PVC oar holders to help keep the oars out of the water whilst not in use.

PVC is also used here to add some permanently attached fishing rod holders that pivot to hold three rods. He has also added a swivelling camera boom so that he can record his adventures whilst out on the river. It looks very cool!

Want to Customize Your Inflatable Pontoon?

There is so much creativity in the inflatable pontoon boat community, and I’ve only highlighted a few modification projects above. I would recommend you search out for more projects on YouTube, as well as joining that Facebook group I referenced at the top of this article.

I have also put together a list of the 30 must-have accessories that you can consider purchasing if you want to start up your own customization project. Go check that list out for some great ideas on what you can add to your boat today to make it 100% unique for you.

Once you have bought your own, then I can assure you it’s going to become something that you will love playing with and seeing what you can do to make it totally custom to fit your needs. That’s the beauty of these inflatables as the possibilities to modify them are (almost) endless).

Handy Hint: Want to know what I believe are the best personal pontoons? If so, read these reviews.