Every year, Boat US release their top 10 list of most popular boat names. There are always some popular patriotic boat names listed in there, with Freedom and Liberty often making an appearance.

Boaters are no different to the rest of us, the love the United States and their boats, so patriotic names for boats are always popular, year on year.

However, do you really want to choose a patriotic boat name that is already being used by hundreds of other boats around the nation? Probably not, after all, naming your boat is a chance to be creative and come up something unique that means a lot to you. 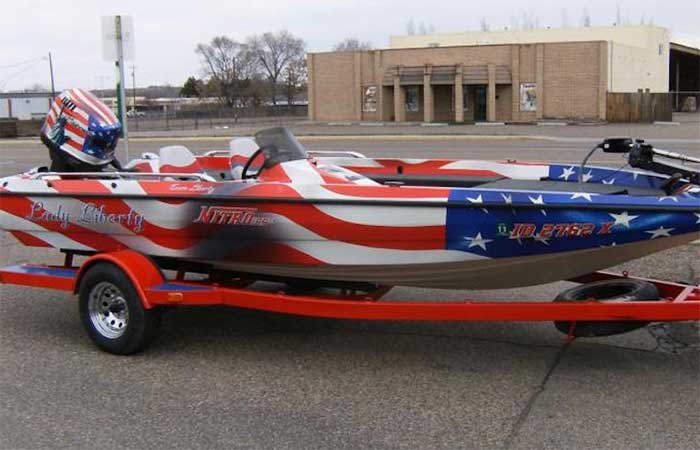 Lady Liberty is a really popular name as you can see with this bass boat wrap (see more wraps here) Image Credit: http://tnt-signs.com

With that in mind, I decided to compile a list of ideas. If you scroll down you can see some patriotic boat names that I have come up with, plus some old favorites you can still use if you like – and I’ve left the funny one until last!

Patriotic names for a boat

Here’s my list of the most American-themed boat names I could come up. Some are my own ideas, others I have found on website forums where people were tasked with coming up with ideas.

Here are some variations on the theme of American boat names where I’ve taken some of the more patriotic ideas and tried to turn them into a pun. 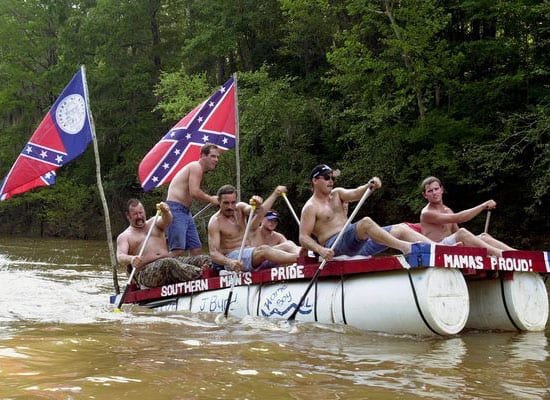 This is probably an example where you haven’t quite got it on-point!

You might not agree with me, but I think at least a few of these are funny patriotic boat names.

If you want to explore more funny ideas, here are some which have a redneck theme. The funniest ones though, are probably in my list of 157 fishing boat names. Take a look in there for some hilarious ideas.

Why choose a patriotic boat name?

Puns and a play on words are just one way you can name your boat to make it stand out from the crowd.

However, there’s another reason people often given for why they have given their boat they name they have; expressing their feelings and pride.

That’s where names with a patriotic flavor have come in, with their popularity surging hugely over the last two decades – for reasons you can well imagine!

Boat owners around the United States of America love to christen their vessels with names that honor their love of the country.

One of the biggest periods in history for these types of names came after both of the Iraq wars. Servicemen and women came back from active duty wanting to get away from it all and buy a boat.

They wanted that boat to have a huge connection to their lives; hence the uplift in patriotic boat names registered in America around these times.

A name like the ones listed above can help to evoke the feeling of liberty and freedom. And means that every other boat owner you come across knows exactly where you suand on things.

Buy an American flag too

For an even more patriotic flavor, get yourself an American flag. I’ve reviewed a few of the best ones, including the supporting poles – see all American boat flags here.

They are simple to attach, and can be set onto a Bimini, side rail, or anywhere else you think flying the Stars and Stripes will work best.

No matter what your politics, everyone is usually agreed that we should have a pride in our country and our people.

Give your boat an American name and fly your flag proudly.