The Sweetwater 2286 is lovely little coastal pontoon boat which has proved very popular for beginners and those on a budget. In this, the first of my pontoon boat reviews, I took a trip out in it to see how it would perform, and whether it’s good value for money or not.

Now my first impressions are that it’s small, but that’s why people buy it, as it’s a great entry-level pontoon boat. It’s certainly far more affordable when compared to larger pontoons. 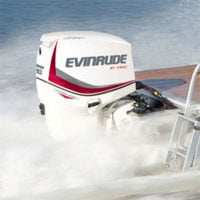 The best thing about this boat though, and this is my own personal view, is the Evinrude E-Tec Pontoon Series engine – it’s what makes it so unique. But, I wanted to see how it would perform when out on the water.

To start with, the SW 2286 is sat on two 25-inch tubes. Both are fitted with spray reels at the nose. Towards the stern is an engine pod that adds to her buoyancy and keeps a nice and smooth acceleration.

The Sweetwater 2286 Coastal series has a length overall of 22 feet 3 inches, with a beam of 8 feet 6 inches. With full fuel and two people on board, plus the engine, it’s weight on the water is 2,787 pounds – giving it a reasonably average weight for a pontoon boat.

Out on the water we reached a top speed of 22.3 miles per hour at 5,800 rpm, which at that speed meant we were burning just 7.3 gallons of fuel, giving us a range of 58 miles with this boat’s 21-gallon tank.

For me, that’s a very economical pontoon (click here for fuel consumption tips).

Our best cruising came in at 4,000 rpm at 13.3 miles per hour, which brought our fuel consumption down significantly to 3.6 gallons per hour giving 5 hours and 18 minutes endurance with a range of 71 miles – whilst still holding back a 10% reserve.

When I’ve tested pontoon boats, I am always very aware of the engine, as the pontoon’s hull simply resonates it throughout the boat. But I was more aware of this engine due to its smoothness. Not that it was quieter than other pontoons, it just felt a lot smoother than similar sized and powered boats.

It has an external oil tank that lets you fill up remotely and the engine draws from the external tank to the one in the engine. This is important because a lot of pontoons are set-up so you can’t even get to the engine. That makes it very difficult to get to that oil underneath the shroud. Not with the Sweetwater 2286 though!

This boat also has a capacity for improved thrust and I did have good hole shots, acceleration was crisp, and when backing down I got good thrust in reverse too.

Acceleration was respectable and while there’s no real time to plane on a pontoon boat we did accelerate through 20 miles per in hour in around 7 seconds.

With regards to the handling, we were getting speeds in the low to mid-twenties which is very typical in a pontoon boat. We had a bit of a wet ride in some chops, with spray over the sides, but it’s the turning radius that was pretty large compared to what I was used to.

Just like other small pontoons, giving it a boost of speed was not going to kick that stern around so remember that if you are coming into the dock.

In turns, the SW 2286 remains level throughout, which is typical of a twin tube design.

Now let’s take a closer look at the features.

It has amazing head room, with 7 feet available underneath the Bimini top. The L-shaped seating over to the port side wraps around a plastic pedestal table with 4 cup holders. There was also easy to access storage under the seats including a live well for the fishing fans, plus additional storage access under more of the seating ends. 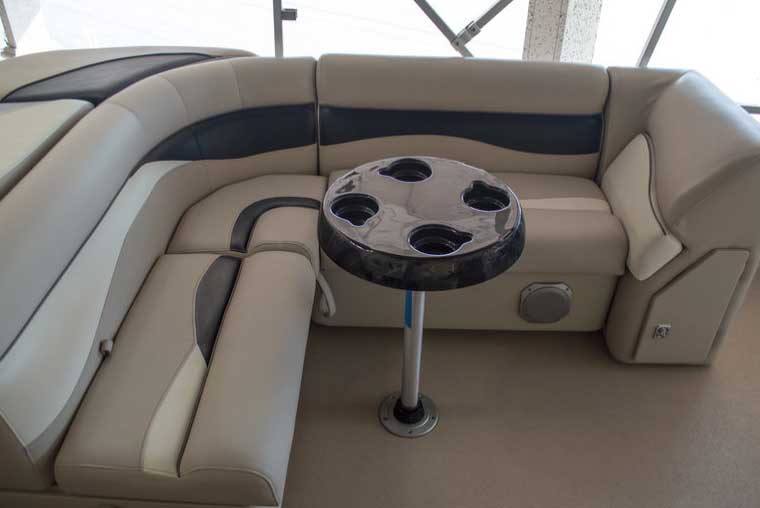 The pedestal with cup holders and some of the seating configuration.

At the forward, there’s the usual configuration of opposing couches, which both have storage underneath. And don’t ignore the awesome looking stainless-steel speaker grills that are strategically placed throughout the entire pontoon under the various seating areas.

There are three boarding gates in total, with the aft boarding gate coming in at 18 inches wide. The port side gate is 23 inches wide, with a bow gate of 32 inches, which is wheelchair accessible.

Boarding is easy from the fore deck, it comes out 18 inches from the fence. This gate is secure when closed, but when open, nothing stops it swinging which is a bit of a negative point for me.

Now the aft gate does have something to hold it into the open position which leads to a 5-step boarding ladder.

The stern deck is quite narrow, but that gives us more room inside the cockpit, especially for the sun lounger pad which has more storage underneath which is where the batteries and remote oil tank are kept.

Overall, the Sweetwater 2286 is a good pontoon boat that’s easy to handle. The Evinrude E-Tec makes it a comfortable riding boat too. This great entry-level pontoon that will suit leisure seekers and fishing fans alike.